EXPLORE the Alejandro de Humboldt National Park with this slideshow, check the location map and get all the facts and information below. 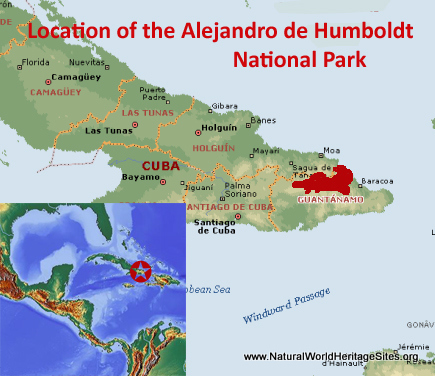 Location and Values: The Alejandro de Humboldt National Park is located in north-eastern Cuba and includes marine and coastal areas as well as forested mountains.   Its global significance relates to its role in protecting the biodiversity of Cuba which is a distinct biogeographical province.  Most of the plants and animals on the Caribbean island of Cuba are endemic, and the Alejandro de Humboldt National Park plays a key role in protecting many of these species, within one of the most biologically diverse tropical island sites on Earth. Three quarters of the plants, a third of the mammals, a fifth of the birds and the majority of reptiles in the park are endemic to Cuba, with many restricted to this region of the island.

The extraordinary diversity and high degree of endemism are attributed to a number of factors, including the area’s (supposed) role as a ‘refuge’ for plants and animals during climatically-challenging periods during the Pleistocene Era, as well as the large size, altitudinal range (from below sea level to 1,175m) and complexity of the site’s land forms and soil types.  Many of the underlying rocks are mineral-rich and toxic to most plants, creating unusual evolutionary pressures that have resulted in the development of species and ecological communities specially adapted to this unique environment.

As well as the forested mountains and important freshwater habitats of the park’s rivers, there are xeromorphic shrub communities on drier upland parts of the park, with coastal mangroves and wetlands at lower elevations.  About 4% of the park protects a biologically diverse marine zone along the coast, with coral reefs to depths of 220m.

Conservation Status and Prospects. According to IUCN’s Conservation Outlook Assessment (2017) the conservation status of the Alejandro de Humboldt National Park is ‘good, with some concerns’. The IUCN report notes that the site benefits from a high degree of natural protection due to its remote and inaccessible location and habitats have recovered well from some degradation prior to its world heritage listing.  The current level of threats to the site is low, but there is some concern about the impact of (1) invasive and exotic species, (2) climate change (3) destruction of vegetation by hurricanes, and (4) fires, especially when there is an accumulation of dead biomass following hurricane events.

The slideshow ‘tells the story’ of the Alejandro de Humboldt National Park with a portfolio of photos that illustrate its landscape features and some of the typical plants and animals.  It starts with landscape views of the forests, rivers and waterfalls, followed by some photos of the rocky coastline, before returning to the forest interior.  Throughout the slideshow, some of the typical plants and animals are shown, including (in order of appearance), several species of birds (Cuban Tody, Fernandina’s flicker, Western Spindalis and Cuban Bullfinch), lizards and some colourful snails.

The following Flickr photographers are acknowledged with thanks for their contributions to this slideshow (as credited in the watermark of each photo):  Andre Bherer, Pete Smith, Richard Collier, Marcel601, Paulus Veltman, Rafael Medina and Cesar O. 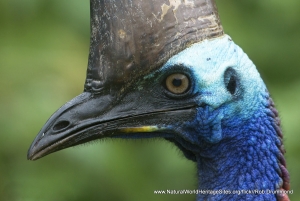 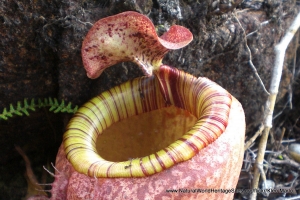