You are here: Home1 / All featured sites2 / Lorentz National Park

EXPLORE the Lorentz National Park with this slideshow, check the location map and get all the facts and information below.

Location and Values: Lorentz National Park is the largest protected area in southeast Asia, located in Indonesia’s Papua Province on the island of New Guinea.  It extends from a tropical marine zone in the Arafura Sea to the summit of southeast Asia’s highest mountain range (Puncak Jaya, 5,030m asl, the product of collision between the Australian and Pacific tectonic plates).  This is the only protected area in the world to include a full range of habitats and ecological gradients from snow-capped mountain peaks to a tropical marine environment.

Its vast wilderness (more than half the size of Switzerland) includes extensive lowland wetlands, mangrove forests, freshwater peat swamps, swamp forests, and a series of vegetation zones determined by altitude on the mountain slopes. Various rainforest communities occupy the lower slopes merging with drier heath forest communities, cloud forests and upper montane (coniferous) forests at 2,800m to 3,200m.  Above this, subalpine communities include some dwarf forest types as well as mires, sedges and tussock grasses, with an alpine zone (4,170m to 4,600m) of heaths, dwarf shrubs and grass/lichen tundra at higher elevations.  The high peaks are characterized by a nival zone of bare rock and algae-stained residual ice caps.

From a biological perspective the site is exceptional in terms of species richness and the number of endemic, rare and endangered species.  The fauna and flora of the island of New Guinea shows strong affinities with Australia, rather than the rest of tropical South-East Asia, as the two areas were connected by a land bridge until about 10,000 years ago.  Consequently, many of the characteristic species of Lorentz National Park are relatives of present-day Australian plants and animals, with common origins on the ancient super-continent of Gondwana. The park supports extensive Nothofagus beech forests (more commonly associated with south-eastern Australia, New Zealand and the southern Andes), and has animals such as tree kangaroos, echidna, other marsupial mammals, numerous species of parrots, bowerbirds and birds-of-paradise.

Conservation Status and Prospects. According to IUCN’s Conservation Outlook Assessment (2020) the conservation status of Lorentz National Park is of ‘significant concern’. The IUCN report recognizes that most of the park remains intact due to its remote, inaccessible and rugged terrain, but expresses concern over the construction of new roads in and around the park.  A particular concern is the new road that traverses the mountains through the eastern arm of the park between Habema (near the highland settlement of Wamena in the north) and Kenyam (on the southern slopes).  This new road threatens the tract of alpine, sub-alpine and montane forest habitats of the central cordillera within the park (habitats which are particularly rare and valuable from a biodiversity perspective). More generally, there are scattered settlements throughout the park which require development services, and any new roads to service these settlements will become an increasing threat. They would attract settlement, land clearance for agriculture, logging and poaching in the park interior unless suitable mitigation and management measures are strictly applied.

Other threats to the ecological integrity of the park identified in the IUCN report include (1) climate change (2) poaching (3) wildlife trade and (4) illegal logging.  The report notes that global warming is likely to result in the final disappearance of the remaining glaciers within 10-15 years.  At present the management capacity is very limited and ill-prepared to deal with the escalating treats to the park.

The slideshow ‘tells the story’ of Lorentz National Park with a portfolio of photos that illustrate its landscape features and some of the typical plants and animals.  It starts with a series of aerial photographs showing the various regions of the park from the coastal lowlands and wetlands to the montane forests and highest peaks with their remnant glaciers.  It then provides some more intimate portraits of the fauna and flora as well as some local cultural festivals amongst the seven ethnic communities that live in and around the park. Throughout the slideshow, some of the typical plants and animals are shown, including (in order of appearance):  Pesquet’s parrot, Eclectus parrot, Brehm’s tiger parrot, birdwing butterfly (Ornithoptera tithonus), Raggiana bird-of-paradise, Magnificent bird-of-paradise, King bird-of-paradise, black-spotted cuscus, red-bellied marsupial shrew, Dingiso tree kangaroo, common spotted cuscus, brown sickle-bill, ribbon-tailed astrapia, Papua forest dragon, southern crowned pigeon, southern cassowary, flame bowerbird and Blyth’s hornbill.  The slideshow finishes with a short selection of photos to illustrate some of the existing and potential threats to the park, including mining, road construction, land clearance for agriculture, logging and palm plantation development.

Note that the photos are intended to illustrate the general features of the park, but are not all taken strictly within its boundaries. Some of the close-up photos of animals are from other locations (including animals in captivity) and are included to illustrate species likely to be found in the area. 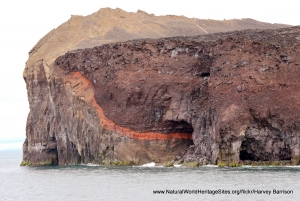 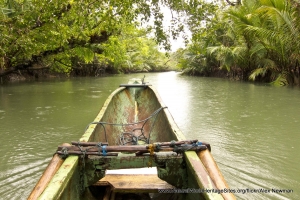