You are here: Home1 / All featured sites2 / Blue and John Crow Mountains

EXPLORE THE BLUE AND JOHN CROW MOUNTAINS with this slideshow, check the location map and get all the facts and information below. 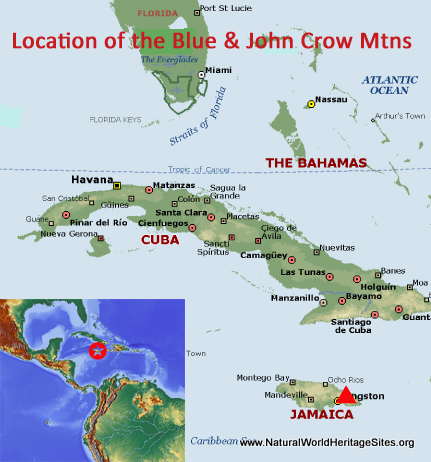 Location and Values: The Blue and John Crow Mountains site is located in the highlands of eastern Jamaica, and occupies the higher-lying parts of these mountain ranges from elevations of about 850m to Jamaica’s highest peak at 2,256m.  Most of the site is covered by various types of forest, including montane forest, cloud forest and (at higher elevations) elfin forest.  These forests represent some of the last remaining areas of contiguous natural forest in the Caribbean region and support an exceptionally high concentration of rare and endangered species, including many Jamaica endemics.  For example, 22% of the 1,357 species of flowering plant recorded at the site are Jamaica endemics.  For birds, Jamaica is notable for having the highest number of endemic species of any Caribbean island (including five endemic genera), many of which are protected in the Blue and John Crow Mountains.

In addition to its importance for biodiversity, the area carries great cultural significance, having served as a natural refuge for indigenous Tainos people fleeing slavery, and for escaped African slaves, known as Maroons.  The settlement of Nanny Town was established by these people and now provides an archaeological record of this grim colonial legacy, together with the associated forest trails, lookouts, hiding places etc.  Meanwhile, many of the beliefs, music and traditions that were practiced in the mountain refuge live on as intangible heritage.

Conservation Status and Prospects.  According to IUCN’s Conservation Outlook Assessment (2017) the conservation status of the Blue and John Crow Mountains is ‘good, with some concerns’. The IUCN report notes that ‘The impressive dedication of many governmental and non-governmental actors and external supporters and of course the local Maroon Community are fully acknowledged. The World Heritage initiative and eventual inscription as a mixed property have generated further momentum and visibility, including in exemplary form as regards the culture-nature nexus. The severity and large number of threats, likely to be aggravated by anticipated climate change, combined with limited management resources, however, are of concern. Permanent and increased management responses will be needed in order to maintain the extraordinary cultural and natural heritage of the property. ’

The slideshow ‘tells the story’ of the Blue and John Crow Mountains through a series of photos by Liana Jansen and other photographers.  They cover some of the main natural and cultural features of the site, starting with a climb through the forests and showing some of the key locations (and personal camouflage techniques) used by the fugitive maroons.  Some archaeological remnants are shown, as well as tourist facilities and community-based initiatives to provide local income and preserve some of the intangible heritage – including the local cuisine, dance and music.  The Charles Town herbarium museum exhibits native medicinal plants that were important for the survival of the maroons.  The slideshow includes photos of the Blue Mountains Peak Trail and the stunted trees, draped in lichens and mosses, typical of the elfin forest found at higher elevations, as well as many of the endemic birds.

In addition to photos by Liana Jansen, the following Flickr photographers are acknowledged with thanks for their contributions to this slideshow: Dave Curtis, Diego Tirira, Dominik Starosz, karipep, Kent MacElwee, Midnight Believer and Yabai82. 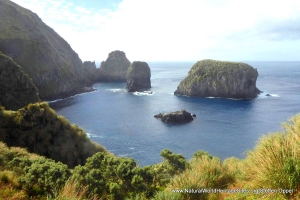