EXPLORE Tassili n’Ajjer National Park with this slideshow, check the location map and get all the facts and information below. 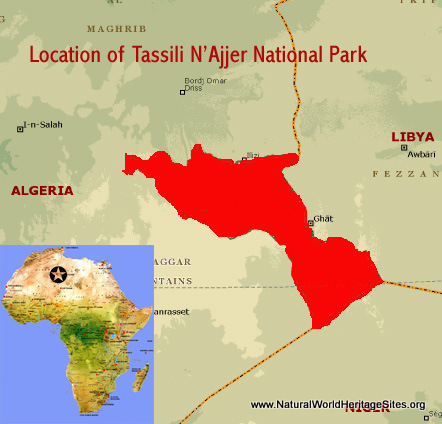 REVIEW OF WORLD HERITAGE VALUES: According to IUCN’s Conservation Outlook Assessment (2014), the specific attributes which qualify Tassili n’Ajjer National Park for world heritage status under natural criteria can be summarised as follows.  As the park is listed as a ‘mixed’ site, it also satisfies one of the Convention’s cultural criteria, recognising the outstanding value of the area’s rock-art heritage.  The park’s outstanding natural values are:

Exceptionally scenic desert scenery.  Few areas in the world offer such exceptional desert scenery.  The landscape is characterised by spectacular natural sandstone “rock forests”, sculptures, arches and caves created by the erosive forces of water and wind, set in a sea of dunes and shifting sands.

Outstanding geological record of the area’s transition from wet to hyper-arid desert conditions. The area’s geological features provide an exceptional record of long-term geological events as well as more recent climatic changes. Old sandstone plateau were subject to intense fluvial erosion during relatively recent times, creating steep gorges and wide sand-filled valleys.  As the climate has become progressively drier, wind erosion has brought about further change, etching into the landscape its own unique signature and resulting in the spectacular rock formations seen today.

Exceptional biodiversity values.  Although the site is not listed under biodiversity criteria, Tassili n’Ajjer is potentially one of the prime sites for desert biodiversity conservation worldwide. Its deep valleys protect relict Mediterranean as well as Sudano-Decan and Saharo-Sindien vegetation and flora, and constitute a centre of plant diversity (with about 300 recorded species of which 73 are endemic).  The site protects many rare and endangered species including the globally endangered Saharan Cypress (with just 240 individual trees remaining) and globally vulnerable animal species such as cheetah.  The larger desert antelopes, addax and scimitar-horned oryx are probably now locally extinct but their presence in the recent past indicates the suitability of the habitat for these iconic animals, which might ultimately be re-introduced.

CONSERVATION STATUS AND PROSPECTS: The outstanding scenic and geological attributes which provide the basis for listing Tassili n’Ajjer as a world heritage site under natural criteria are not under any significant threat. However, its biodiversity values are likely to be highly threatened by regional insecurity, the demands of local people for plant and animal products, the lack of any active programme of protection for biodiversity, and the likely impact of hunting from motorised vehicles.  Although these threats have not been specifically documented for this area, they are known to impact other Saharan desert protected areas (including the two world heritage properties of Air and Tenere (Niger) and the Ennedi Massif (Chad)) and are considered to be general problems affecting biodiversity conservation across most of the central Sahara. There is certainly a need for closer monitoring and assessment of the area’s biological resources and it may be necessary to strengthen the existing management by the Department of Culture with the inclusion of some nature protection specialists.

MANAGEMENT EFFECTIVENESS: The site has been protected as a Cultural Park under the Law on Protection of Cultural Heritage since 2004. Management is guided by an Advisory Board (including representatives of government departments and the local community) and based on ad-hoc annual work plans. There is a programme to strengthen biodiversity management at the site, supported by international funds provided through the Global Environment Facility (GEF). However, the immense size of the site (72,000 km2) and the relatively low number of staff responsible for its protection means that management remains very challenging.

REVIEW OF CONSERVATION ISSUES AND THREATS: The following issues represent specific threats to the ecology, conservation and values of the Tassili n’Ajjer world heritage site.

Poaching/commercial hunting.  Hunting has resulted in the local extinction of the area’s two largest desert antelopes, the addax and scimitar-horned oryx.  It has also brought local populations of cheetah and slender-horned gazelle to the brink of extinction and threatens other species.

Unsustainable use of trees and other plants.  A significant threat to the vegetation of the park is the unsustainable cutting and use of trees for charcoal by local people and the collection of other plant material, especially those species that are used for medicinal purposes.

Climate change and desertification.  The ecology of the park is highly sensitive to small changes in rainfall and temperature as many species are living at the limits of their geographical and ecological ranges and are especially susceptible to environmental change.  The Saharan cypress is thought to be one such species, which appears to be unable to reproduce under increasingly arid conditions.

Visitor impact.  Tourism is extremely limited in scope at present, but there is clearly great potential for its expansion in the medium-term.  As this happens it will be necessary to minimize potential environmental impacts by regulating use of scarce resources such as firewood and water, and ensuring proper management of litter and waste. 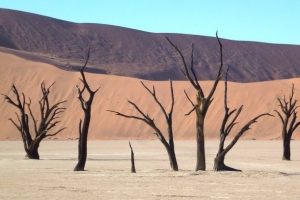