You are here: Home1 / Air and Ténéré Natural Reserves

EXPLORE NIGER’S AIR AND TENERE NATURAL RESERVES with this slideshow, check the location map and get all the facts and information below. 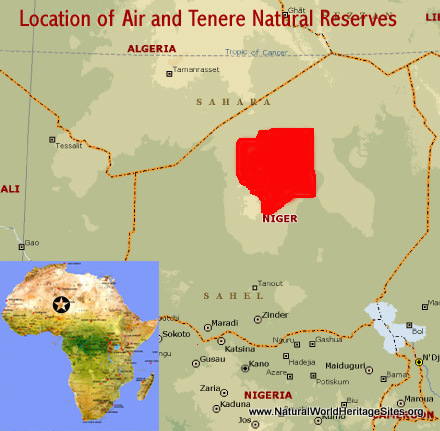 Values: This is the largest protected area in Africa (twice the size of Switzerland), covering a vast swathe of desert and semi-desert land on the edge of the Sahara. At the time of inscription it supported a diverse desert fauna, and was considered to offer hope for the preservation of viable populations of desert antelopes such as addax, dama and dorcas gazelles as well ostrich and barbary sheep. Other key desert species disappeared earlier, notably the scimitar-horned oryx, last seen in 1983. Since then, a period of civil strife in northern Niger, and lack of management capacity, has resulted in a catastrophic decline of all the larger species – ostrich, dama gazelle and addax seem to have disappeared completely, and populations of dorcas gazelle and barbary sheep are now much reduced.

REVIEW OF WORLD HERITAGE VALUES: According to IUCN’s Conservation Outlook Assessment (2014), the specific attributes which qualify the Air and Tenere Natural Reserves for world heritage status can be summarised as follows:

Important habitats for the survival of endangered species. The reserves of Air and Tenere provide the best opportunity for survival of the desert-adapted wildlife species typical of the Sahel-Sahara regions of Niger and the wider Sahara desert. The isolation of the AirMountain massif and historically low human population has allowed the survival of many species that have been eliminated elsewhere in the Sahara and Sahel. The world heritage site contains important natural habitats for three species of endangered desert antelopes: the Dorcas gazelle (Gazella dorcas dorcas), Rhim’s gazelle (Gazella leptoceros) and Addax (Addax nasomaculatus). In addition the area supports desert-adapted carnivores such as Fennec (Vulpes zerda), Rüppell’s Fox (Vulpes rueppellii) and Cheetah (Acinonyx jubatus). In total, 40 species of mammals, 165 species of birds, 18 species of reptile and amphibian have been recorded in the reserves. The Air massif also serves as an important transit area for many Afrotropical and Palearctic migratory birds.

Wide variety of desert and semi-desert habitats. The juxtaposition of the high Air Mountains and extensive dune systems of the Tenere desert has led to the development of a dynamic complex of interdependent habitats. These include vast areas of mobile sand dunes alongside fixed dunes, ergs, valleys, cliffs, canyons, rocky plateaus and occasional water sources. In general the Air Mountains support a more Sahelian flora and fauna (on account of the slightly cooler and wetter environment in the mountains), with more woody species of vegetation (such as Acacia ehrenbergiana, Acacia raddiana, Balanites egyptiaca, Maerua crassifolia). The major valleys radiating out of the massif (which benefit from underground water) also support a diverse woody plant community including doum and date palms, Acacia nilotica, Acacia raddiana, Boscia senegalensis, Salvadora persica, and a herbaceous layer with grasses such as Stipagrostis vulnerans. Beyond the immediate influence of the mountains, there are vast expanses of sand and some of the highest dunes in the world with the occasional oasis. These habitats provide the key elements essential for survival of the area’s desert-adapted animals.

Desert landscapes of exceptional natural beauty. The AïrMountains owe their origins to past volcanic events and their course-textured rocks in black and ochre hues contrast vividly with the golden desert sands that pile up in massive dunes against their flanks. Isolated trees, contorted by the rigours of their desert existence and occasional splashes of green in unexpected places draw the eye through a magical landscape that changes with each new vista. In the distance, ridges of blue-and-white marble rise out of the golden sands like the crests of massive waves in this remote sea of sand. Visitors to such a place cannot fail to be moved by its austere beauty.

CONSERVATION STATUS AND PROSPECTS: The world heritage site is in a very critical state and could lose many of its natural values â€‹â€‹if a comprehensive emergency conservation plan is not implemented urgently. Poaching is probably the most pressing threat, as it seems to have eliminated populations of addax and warthog while decimating populations of red-necked ostrich and Dama gazelle. In addition, intensive grazing by domestic stock seems to have caused the extinction of some important plants from the few remaining pastures, including Stipagrostis uniplumis and S. ciliata. There is virtually no active protection and management, but a growing human population is making increasing demands on the area’s natural resources and threatening its natural attributes and conservation prospects.

MANAGEMENT EFFECTIVENESS: There is virtually no active management of the site, which has survived on account of its large size, isolation and historically low human population. Previous government plans to develop a protection and management programme have been thwarted by the 2006-9 Tuareg rebellion, and by insecurity in this part of the Sahara associated with regime change in Libya a few years later. By 2014 the reserves lacked personnel and financial resources and there was no management plan. However, there were expectations that newly-recruited staff from the Ministry of Water and Forestry would be deployed to the area, in which case it will be important to ensure that they are properly equipped with vehicles, communications and patrol equipment. In the first instance a limited area within the wider reserves needs to be properly secured so that animal populations in a relatively small area can recover sufficiently to (eventually) recolonise other parts of the (depleted) landscape.

REVIEW OF CONSERVATION ISSUES AND THREATS: The following issues represent specific threats to the ecology, conservation and values of the Air and Tenere Natural Reserves world heritage site.

Civil Unrest. Insecurity has hampered the commencement and implementation of management activities repeatedly, especially during the Tuareg rebellion of 2006-2009 and subsequently as unrest in Libya (following revolutionary regime change there) spilt over into northern Niger with incidents of armed banditry and deployment of landmines. Although the security situation has now improved it continues to undermine efforts to develop necessary conservation initiatives.

Poaching (illegal hunting). Poaching seems to have resulted in the local extinction of addax and warthog while decimating populations of red-necked ostrich and Dama gazelle in recent years. It now threatens other species of mammals and large birds, notably Dorcas gazelle and Barbary sheep as well as Nubian and Arabian bustards. Populations of larger carnivores (such as hyena and cheetah) have experienced a sharp decline and are now very rare, presumably as a result of the reduction in available prey (rather than the direct effects of hunting these species).

Grazing by domesticated animals. Domestic animals compete with wild ungulates for scarce grazing, and the presence of herders (who often engage in hunting opportunistically) means that wildlife is denied access to many areas and forced to forage in increasingly marginal areas. This has a severe impact on the number of wild ungulates that an area can support (even if hunting pressure could somehow be brought under control).Grazing pressure is increasing around Agadez and other (expanding) settlements where residents maintain as many livestock as locally-available pastures allow. Elsewhere pastures are less threatened as nomadic pastoralists tend to move their livestock long distances between temporary grazing areas allowing each area to recover once livestock has been moved on. Some of the more palatable grasses have been much reduced by over-grazing and three species are thought to have become locally extinct as a result of grazing pressure (namely Stipagrostis uniplumis, S. ciliata, and ‘Teshil’ (name in the Tamashek language)).

Crop Production. Very little land in the reserves is suitable for crop production but several oasis areas are settled and cultivated, thus eliminating natural habitats which were once available to wildlife.

Tree cutting. Naturally-occurring trees are highly threatened throughout the region by demands for firewood, the principal source of fuel for cooking. An estimated 94,000 tons of wood are extracted from the world heritage site and its surroundings each year to supply the towns and villages in Agadez region. This is having a severe impact on the ecology of the reserves.

Invasive alien species. Prosopis juliflora has become highly invasive in many areas of the reserves, where it creates dense stands, out-competing the naturally-occurring species. There is anecdotal evidence that this has resulted in the loss of overall biodiversity and an increase in populations of golden jackals and hares.

Mining. Although there is no immediate threat of mining in the reserves, the prospect of exploration and possible future mining operations within the reserves cannot be ignored. There is thought to be potential for discovery of oil and a large uranium mine to the west of the reserves at Arlit has already led to the establishment of a desert town of 80,000 people with associated pressures on the fragile desert environment.

The slideshow provides a comprehensive overview of Niger’s Air and Tenere Natural Reserves (officially designated by UNESCO as a World Heritage Site In Danger), showing the area’s spectacular desert landscapes, wildlife habitats, plants and animals (including various threatened species). It highlights some of the conservation management issues, and illustrates local community livelihoods and some typical visitor experiences. 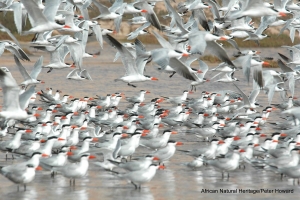 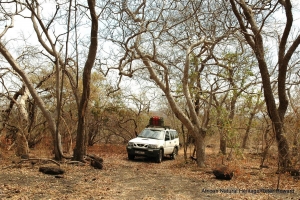