You are here: Home1 / All featured sites2 / Lakes of Ounianga

EXPLORE CHAD’S LAKES OF OUNIANGA with this slideshow, check the location map and get all the facts and information below. 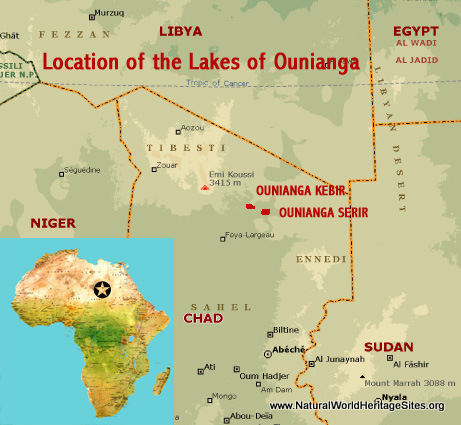 Location and Values: The Lakes of Ounianga are found in the heart of the Sahara Desert, in an area of northern Chad that receives no more than 2mm of rain annually. They depend on an underground supply of ‘fossil’ water that fell on the area in ancient times when the Saharan climate was much wetter than it is today. The lakes are situated in a shallow basin below sandstone cliffs and hills, from where the ancient water flows. Remarkably, this unique hydrological system is able to sustain the largest permanent freshwater lakes to be found in such an arid desert environment anywhere in the world.

REVIEW OF WORLD HERITAGE VALUES: The specific attributes which qualify the Lakes of Ounianga for world heritage status can be summarised as follows:

World’s largest lake system in the desert interior. The Lakes of Ounianga are the largest known complex of lakes in an extreme desert setting anywhere in the world. They are exceptional in terms of their dependence on a continuous inflow of ‘fossil’ water which compensates for extremely high rates of evaporation, and for the diversity of the individual lakes in terms of water volumes, structure and composition (including freshwater, saline and hyper-saline lakes). The ancient aquifer and its associated hydrological system is still not fully understood, partly because it is so unique in global terms.

Exceptional natural beauty. The two groups of lakes lie in a natural basin, set against some spectacular sandstone cliffs in the heart of the Sahara.  The varied colours of the lake waters and the vivid greens of the surrounding vegetation contrast with the golden sands and wind-sculpted sandstone outcrops that provide their desert setting, creating a landscape of exceptional natural beauty. In its technical evaluation of the nomination, IUCN identifies a number of specific attributes which contribute to its exceptional aesthetic quality, namely (a) the varied colours of the lakes with their blue, green and /or reddish waters, reflecting each lake’s different chemical composition, (b) the topography of the site, which provides natural cliff-top lookout points with extraordinary wide-ranging views across the lakes basin, (c) the effect of the characteristically strong winds, which provide a sense of dynamism, moving rafts of floating plants and waves across the water surfaces, (d) the spectacular desert setting with its wind-sculpted sandstone features in a variety of curious shapes and colours, and (e) the unusual elongated shapes of the lakes, separated by sand dunes, reminiscent of ‘large arrowheads shot into the desert’.

CONSERVATION STATUS AND PROSPECTS: The natural values of the site are well maintained and the outlook for its conservation generally good, although there are some potential threats and new systems of protection and management are only just being put in place for the first time.  The site is classified by the Chad government as a ‘Natural Site’, which protects it against any activity that could threaten its integrity, including mining.  The possibility of unsustainable levels of water extraction for irrigated agriculture has been addressed by a recent decree which aims to maintain traditional agricultural practices in the region.  Nevertheless, there are a number of threats which need to be carefully managed, given the sensitive nature of the environment.  New concrete structures are springing up in the two villages which are spoiling the aesthetic values of the traditional settlements, and a main trans-Sahara highway passes close to the lakes with associated demands for water, accommodation, waste disposal and other services.  The nature of the fossil aquifer is unknown, but may be part of a larger reservoir, perhaps even linked to those in southern Libya that are already subject to massive water extraction projects.

MANAGEMENT EFFECTIVENESS:  A new 10-year management plan was finalized in 2014 and there seems to be a strong political commitment to its implementation.  It is however, too early to assess the effectiveness of its implementation.  Until recently there has been no formal mechanism for the area’s conservation managemrent.

REVIEW OF CONSERVATION ISSUES AND THREATS: The following issues represent specific threats to the ecology, conservation and values of the Lakes of Ounianga world heritage site.

Water extraction.  The main potential threat to the site comes from water extraction.  The freshwater in the lakes (and the fossil aquifer that maintains them) is of enormous potential economic value, and is likely to come under increasing pressure for exploitation (similar aquifers in the Libyan section of the central Sahara are already being exploited on a massive scale to provide water for agriculture, urban and industrial use thousands of kilometres away).  At a local level, the demand for water is likely to increase as communities living around the lakes become more market-driven, ‘traditional’ farms are expanded, and irrigation more widely adopted.  In addition, it is likely that trans-Saharan road traffic through Ounianga Kebir will increase substantially as soon as Libya regains some political stability, leading to expansion of this important ‘truck stop’, and corresponding demands for water.

Water Pollution.  Some early signs of pollution in the waters of the two biggest Lakes (Yoan and Teli), arising from their proximity to settlements have been recorded, with ‘blooms’ of floating algae attributed touse of detergents at the shore.  This has now been banned, but there will be need to manage all waste from the growing settlements around the lakes much more effectively to prevent pollution.

Dune encroachment of the lakes.  Strong winds are driving sand into the lakes and causing dunes to advance into the lakes at a rate of about 2 metres per year.  Although this may not seem to present any immediate threat to the site, and is part of a natural process, it should be noted that most of the lakes are only 2-300 metres wide, so could disappear altogether within about 100 years.  The advance of the dunes may be at least partially due to the effects of overgrazing by domestic stock around the lakes, thereby removing vegetation that would otherwise be stabilising the dunes and preventing their advance.  Research and monitoring of this is clearly needed, including some experimental stabilization efforts.

Impact of tourism.  Tourism to the area is currently at extremely low levels, but there are prospects for direct flights between Europe and Faya in northern Chad, which would allow for greatly increased tourism.  Tourism is unlikely to threaten the site in the foreseeable future but care must be taken to ensure that the environmental impacts of any associated infrastructure (such as hotels, camps) are properly evaluated and mitigated.

Overgrazing by domestic animals.  Animal husbandry is one of the main economic activities in the area and is likely to be impacting the vegetation in a significant way, leading to increased erosion and dune progression.  There is no information on the current status of wildlife in the area but it is probable that populations of larger mammals are very low, partly due to displacement by domestic animals.

Expansion of cultivation.  A recent decree aims to ensure that traditional agricultural practices are followed, but any expansion, using mechanical water pumps and other technological innovations, are likely to create increased demands for water, with unknown consequences for the lakes and local hydrology.

Road traffic.  The main trans-Sahara highway passes through Ounianga Kebir where trucks have to be unloaded for customs inspection, causing drivers and passengers to stop over for several days.  These people used to camp at the lake shore, where environmental impacts were becoming significant, but this has now been reduced by providing bungalows equipped with toilets at some distance from the lake.  Nevertheless there is potential for greatly increased traffic across the border to Libya, which may lead to further demands for water, pollution of the lake and other environmental impacts. 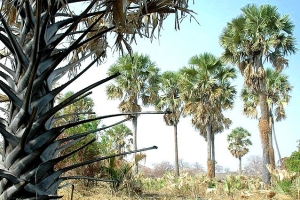 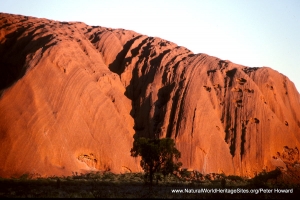