You are here: Home1 / All featured sites2 / Taï National Park

EXPLORE IVORY COAST’S TAI NATIONAL PARK with this slideshow, check the location map and get all the facts and information below. 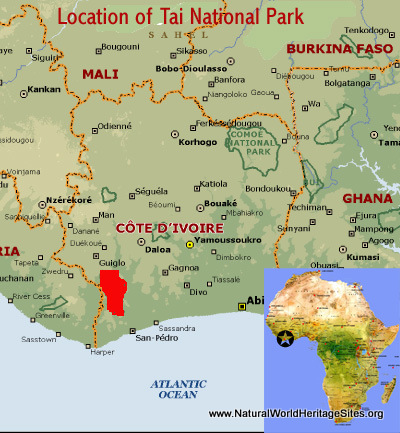 Values: Tai National Park is the largest and best preserved remnant of the ‘Upper Guinea’ rainforest of West Africa. These forests are separated from the rainforests of central Africa by the dry ‘Dahomey Gap’, and support a quite distinct fauna and flora for which they are recognised as a ‘Biodiversity Hotspot’. Tai supports many ‘Upper Guinea Forest’ endemic species, including pygmy hippopotamus, and several forest duikers such as Jentinck’s and zebra duikers; and it has 12 species of bird that are found only in this limited area of West Africa. The chimpanzees of Tai are known internationally from remarkable television footage of them hunting colobus monkeys and using stone tools to crack open wild nuts.

REVIEW OF WORLD HERITAGE VALUES: According to IUCN’s Conservation Outlook Assessment (2014), the specific attributes which qualify TaiNational Park for world heritage status can be summarised as follows:

Exceptionally high biodiversity. TaiNational Park supports an exceptionally diverse assemblage of plants and animals, including 1300 species of higher plants, and 47 of the 54 species of large mammals known from the Upper Guinea rainforests (the isolated block of rainforest that covers parts of coastal West Africa from Ghana to Sierra Leone). There are 11 species of primate including Campbell’s, spot-nosed and Diana monkeys, black and white colobus, red colobus and green colobus, mangabey, and chimpanzee; three species of pangolin (giant, tree and long-tailed), African golden cat, leopard, elephant, red river hog, giant forest hog, pygmy Hippo, aquatic chevrotain, bongo, buffalo and an exceptional variety of forest duikers. Over 250 bird species have been recorded, including 143 species restricted to primary forests and prominent large birds such as hornbills and white-breasted Guineafowl which have been greatly reduced elsewhere because of hunting.

Global importance of species, with many endemic to West Africa. More than half (54%) of the park’s 1300 species of higher plants are known only from the ‘Upper Guinea’ forests of West Africa. The park falls within an important ‘biodiversity hotspot’ and one of Birdlife International’s Endemic Bird Areas (in recognition of the large number of species restricted to the Upper Guinea forest area).

Rare and endangered species. The diverse fauna and flora includes many rare and endangered species, including many of the Upper Guinea forest endemics. Chimpanzee, pygmy hippo and several species of forest duiker (antelopes) and pangolins are amongst the globally threatened mammal fauna, while several plants, previously thought to be extinct (such as Amorphophallus staudtii) have been discovered in the park.

Large, diverse and intact rainforest landscape. The park is one of the last remaining areas of the vast primary forest which once stretched across Ghana, Ivory Coast, Liberia and Sierra Leone, and is the largest forest block remaining in West Africa. With an area of â€‹â€‹approximately 5,360 km2, TaiNational Park and adjacent N’Zo Wildlife Reserve represent over 50% of the total area of â€‹‘Upper Guinea rainforest’ under strict legal protection. Because of its large size, the TaiNational Park provides a rare opportunity to preserve a complex forest ecosystem with associated ecological interactions and genetic resources. The park is located in the rain-drenched south-west of Côte d’Ivoire on a sloping granite peneplain pierced by several inselbergs (giant rock outcrops towering above the surrounding forest canopy, including prominent MountNiénokoué in the south). The vegetation is dense evergreen rainforest characterized by tall trees (40-60 m) with massive trunks, sometimes with large buttresses or stilt roots. A large number of epiphytes and lianas form an important element of the lower rainforest strata. Two distinctive forest types occur, one on the poorer soils of the northern and south-eastern areas; and the other along the SassandraRiver and low-lying areas in the south near MountNiénokoué. In these areas a taller, more species-rich forest community exists.

CONSERVATION STATUS AND PROSPECTS: The overall status of the park is satisfactory, although poaching and alluvial gold mining activities are significant ongoing threats. Animal census data from 2009/10 indicate a 50% reduction in primate populations over the previous five years (due to poaching), with all species of monkeys badly affected. Management is constrained by limited finance and other resources and the park is heavily dependent on international aid. Some agricultural encroachment has occurred and there is increasing pressure on the park’s resources from expanding communities along the park’s boundaries. This has been exacerbated by an influx of Liberian refugees who have settled in areas west of the park.

MANAGEMENT EFFECTIVENESS: Management is moderately effective, although resource constraints mean the park’s management plan is only partially implemented. Poaching is having a significant impact on primate populations, indicating a need for enhanced anti-poaching effort. There is a need to engage with neighbouring communities in a more meaningful way, to ensure that local people benefit from their proximity to the park and are willing to support its conservation.

Poaching (illegal commercial hunting). This is the single greatest threat to the park, with poachers targeting duikers (small forest antelope) and primates for sale as bushmeat. Animal censuses carried out in 2005 and 2009 indicate a significant reduction (over 50%) in populations of primates over this period with a particularly dramatic decline in populations of the rare Diana monkey (Cercopithecus diana).

Alluvial gold mining. Most of the rivers and streams in this part of Cote d’Ivoire are rich in deposits of alluvial gold which has become a mainstay of local economies. Many people are engaged in mining activities, entering the park illegally to pan for gold. This not only causes direct disturbance to water courses but involves an influx of people who may also engage in poaching and other illegal resource exploitation within the park. The majority of offenders arrested by park guards are engaged in mining activities of this nature.

Agricultural encroachment. Some areas in the southern part of the park and around LakeBuyo were illegally settled during Cote d’Ivoire’s recent period of civil unrest. This was partly attributed to the lack of clear boundary demarcation, and negotiations are ongoing to find a sustainable solution to the problem. As this is a highly localised problem it is not seen as a major threat to the integrity of the park as a whole.

Deforestation within the wider landscape. The cutting of trees and clearing of forests in the wider landscape outside the park is leading to increased isolation of the park. This is reducing the area of natural habitat available for its animal populations and affecting landscape connectivity by destroying forest corridors that should sustain seasonal dispersal and migration patterns. This can be expected to have a long-term impact on the ecological viability of the park (although its large size will help sustain its key ecological characteristics). 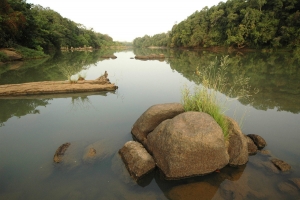 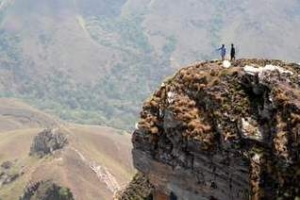