You are here: Home1 / All featured sites2 / Kahuzi-Biega National Park

EXPLORE CONGO’S KAHUZI-BIEGA NATIONAL PARK with this slideshow, check the location map and get all the facts and information below. 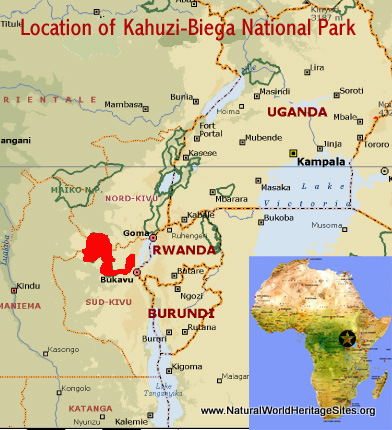 Values: Kahuzi-Biega National Park covers dense primary tropical forest ranging in altitude from 700 to 3,300m on the western flank of the Albertine Rift. About 10% of the area comprises a high mountain range dominated by two extinct volcanoes, Mounts Kahuzi and Biéga. This is connected through a narrow corridor to a much more extensive area of lowland rainforest on the fringes of the Congo River basin. The Park has a diverse and abundant fauna with a population of eastern lowland gorillas, and many rare species that are unique to this part of the Great African Rift Valley.

REVIEW OF WORLD HERITAGE VALUES: According to IUCN’s Conservation Outlook Assessment (2014), the specific attributes which qualify Kahuzi-Biega National Park for world heritage status can be summarised as follows: 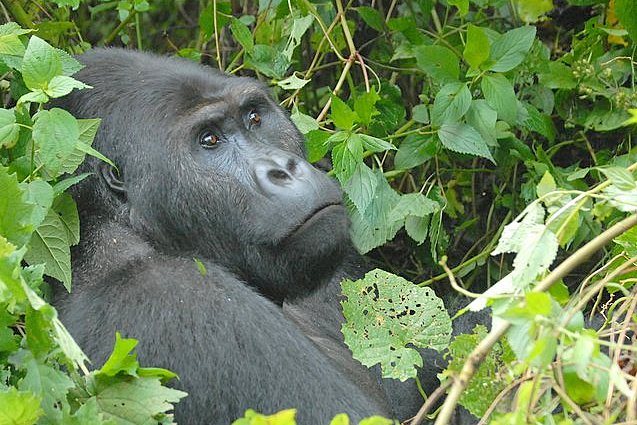 Mid altitude and montane tropical forests representative of the Albertine Rift, a zone of exceptional biodiversity and endemism. Kahuzi-Biega National Park is the second most important site (after Virunga National Park) along Africa’s Albertine Rift Valley in terms of biodiversity, endemism and presence of threatened species. Of note are 14 species of primate, including the endemic Grauer’s gorilla (Gorilla gorilla graueri), the red face chimpanzee (Pan troglodytes schweinfurtii) and two endemic genets: the aquatic genet (Osbornictis piscivora) and the giant genet (Genetta victoriae). The park lies within an important Endemic Bird Area, with 349 species, including 42 endemics. It also lies within a centre of endemism for plants, with 1,178 species recorded from the park. Kahuzi-Biega National Park is one of the few sites in sub-Saharan Africa which includes a continuum of vegetation types within the altitudinal range of 600m to 3.308m including rare habitats such as high altitude peat bogs and afro-alpine formations. 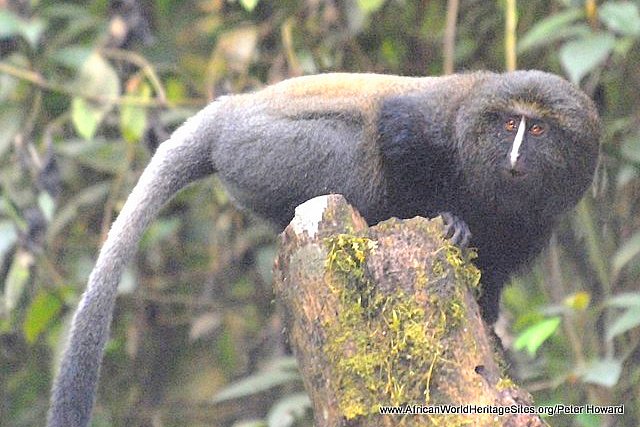 The owl-faced monkey (Cercopithecus hamlyni kahuziensis) is exclusively to bamboo forests between 2,000 and 3,300m in the highland sector of Kahuzi-Biega National Park

Presence of emblematic and endangered mammal species. The park’s most important emblematic species is Grauer’s gorilla. The park is thought to contain one of only four remaining significant populations of Grauer’s gorilla, which has a total world-wide population now estimated at between 5.000 and 15.000 individuals (a very significant decrease from population estimates made in 1999). High levels of poaching of gorillas for the bushmeat trade occurred during recent wars, including several of the habituated gorilla families used for tourism in the high altitude sector of the park. Forest elephants Loxodonta africana cyclotis occur here, but are highly threatened by poaching for the ivory trade.

CONSERVATION STATUS AND PROSPECTS: The outstanding universal values of Kahuzi-Biega National Park are still present, although they are under significant pressure. Gorilla populations have been severely reduced and forest elephants nearly disappeared through poaching for ivory and the bushmeat trade. Illegal mining and agricultural encroachment are causing significant habitat degradation and loss, particularly in the ecological corridor linking the low altitude and high altitude parts of the park. Three key issues need to be resolved: 1) armed militia and army groups must be removed from the park; 2) a coherent zoning plan, in which the legal status of villages in the park is clarified, must be adopted; and 3) the illegal farms in the ecological corridor must be removed. Whilst there have been noteworthy improvements in park management capacity in recent years, there remains a need for strong political leadership to address these key issues.

MANAGEMENT EFFECTIVENESS: As long as armed militia and/or the Congolese army (FARDC) remain active in the low altitude sector and the ecological corridor the park’s values will continue to be seriously threatened. This is a national security problem that park management has little capacity to influence. Progress, albeit slow, is being made to remove the illegal farms from the ecological corridor and prevent further illegal settlement happening. This is an issue involving personal interests at the local government/justice level which the park is having limited success in combating. On-the-ground patrol efforts have tripled since 2009 and an effective Law Enforcement Monitoring system is operational. However significant areas of the low altitude sector remain unpatrolled. Strong political leadership is required to deal with the threats of illegal mining and agriculture in the park. However the park has committed long-term financial and technical partners and park management structures and effectiveness are improving.

REVIEW OF CONSERVATION ISSUES AND THREATS: The following issues represent specific threats to the ecology, conservation and values of Kahuzi-Biega National Park. 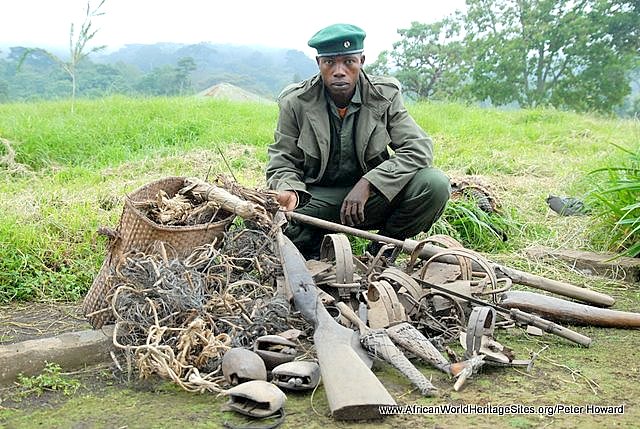 One of the park rangers at Kahuzi-Biega National Park displaying a collection of rifles, snares, gin-traps and other kits confiscated from poachers in the threatened world heritage site

Commercial hunting. Bushmeat commerce, involving almost all vertebrate species, is very intense and adversely affects the biodiversity values of the park. Forest elephants are under intense pressure from ivory poachers with just a few individuals remaining in the high altitude section of the park. Elephants are now extremely rare in the low altitude sector. Many players are involved in ivory poaching including rebel militia (FDLR, Raya Mutomboki, Maï-maï) and uncontrolled elements of the Congolese army (FARDC). In 1994 the park’s elephant population was estimated at 3,720, but in surveys between 2000 and 2008 no traces were found in the low altitude sector and the total population is clearly much lower than it was a decade ago. Gorillas were heavily poached during the wars (mainly for bushmeat) and probably continue to be hunted in the low altitude sector. The population in the high altitude sector was halved during the wars, but surveillance is currently much improved and hunting of gorillas here has been virtually eliminated. However, even in this area they continue to get caught in snares (used for antelope hunting). 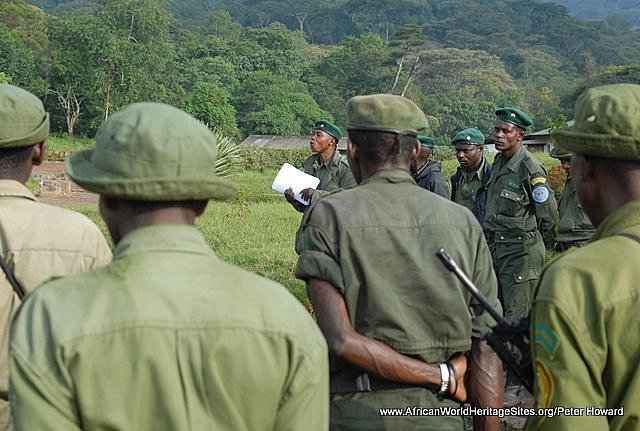 Rangers on parade at Kahuzi-Biega National Park (World Heritage Site In Danger). Much of the park cannot be brought under proper management due to the presence of armed rebel groups

War, Civil Unrest and Military Exercises. Armed militia are involved in hunting, mining and farming inside the park, affecting all areas. Habitats are directly impacted by mining activities and by cultivation that occurs around the mining camps and former villages when these are occupied by rebel groups. Miners are also directly involved in hunting. The insecurity created by the presence of rebel and army groups makes large areas of the park no-go areas for the Congolese National Parks Authority (ICCN).

Mining/Quarrying. In 2011 it was estimated that there were 918 mining sites within Kahuzi-Biega National Park, of which 405 involved armed groups. The influence of armed groups in mining activities is considerable – charging taxes, providing “security” for the miners, and even digging for gold themselves. With such a large number of active sites damage to habitats and wildlife is thought to be significant. 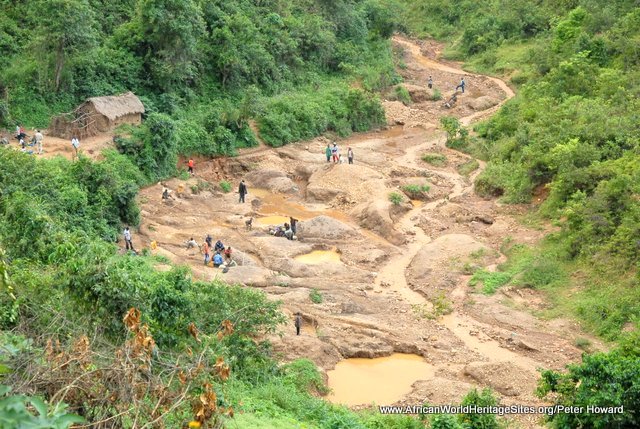 Logging/ Timber Harvesting. In 2009 it was estimated that 10% of the low altitude sector, and 24% of the corridor and high altitude sectors were affected by illegal logging.

Agricultural encroachment. The illegal establishment of farms (for cattle-keeping and cultivation) by wealthy/influential “landowners” in the Nindja corridor constitutes a very serious threat to the ecological integrity of the world heritage site, breaking the park in two. This issue needs to be rapidly resolved, while enough natural habitat remains to allow for the area’s recovery. Furthermore, as long as illegal farms are allowed to remain in the ecological corridor it will be impossible to resolve the issue of the many occupied villages in the low altitude sector which existed before the creation of the park. 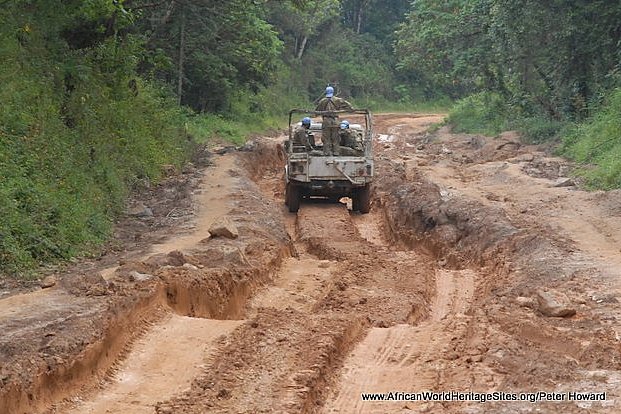 The main RN3 highway, which links Bukavu and Kisangani, passes through the highland sector of Kahuzi-Biega National Park and (although it is almost impassable in its present condition) it could become a major highway that threatens the ecological integrity of the park 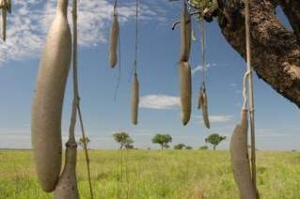 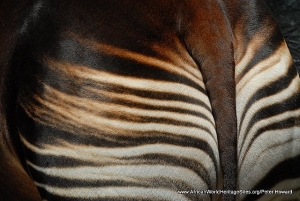