You are here: Home1 / All featured sites2 / Sangha Trinational

EXPLORE THE SANGHA TRINATIONAL RESERVE with this slideshow, check the location map and get all the facts and information below. 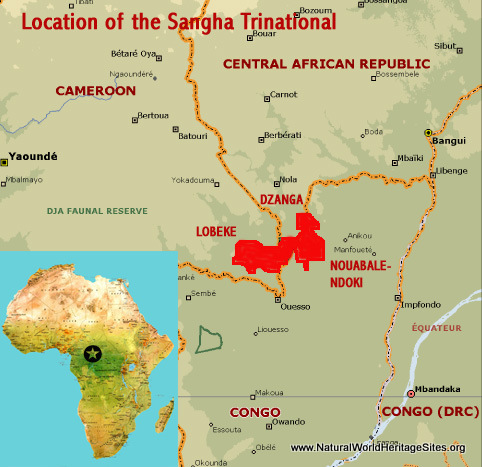 Location and Values: The Sangha Trinational is a major protected area complex in the tropical rainforests of the Congo Basin. It encompasses three adjoining national parks in the border area between the Central African Republic (Dzanga-Ndoki National Park), Cameroon (Lobeke NP) and Congo (Nouabale-Ndoki NP) set within a more extensive forest landscape.

REVIEW OF WORLD HERITAGE VALUES: The specific attributes which qualify the Sangha Trinational area for world heritage status can be summarised as follows:

Extensive area of intact lowland tropical rainforest. The site is remarkable for its large size and wilderness qualities, with a core area of 7,500 km2, embedded in a much wider forested landscape designated as an 18,000 km2 buffer zone. Unlike many forest protected areas elsewhere, the site is not an isolated fragment of forest habitat, but continues to be part of a much larger intact forested landscape with good conservation prospects. This is increasingly rare and significant at a global scale. It has suffered minimal disturbance over long periods, allowing for the continuation of ecological and evolutionary processes at a significant scale.

Outstanding diversity of habitat types. The landscape comprises a mosaic of diverse forest habitats, rivers and waterways, small wetlands and remarkable forest clearings (bais) which attract major wildlife aggregations and support plant species otherwise not found in the forested landscape. The site islocated in a transition zone between the Lower Guinea and Congolian floristic sub-regions, so its flora is especially rich, with elements from each of these major floristic centres. The bais are a special feature of the area providing food, mineral salts and opportunities for social interaction to large numbers of mammals (particularly forest elephant, gorillas, bongo, giant forest hog, sitatunga and forest buffalo), and offer visitors an extraordinary opportunity to see the area’s wildlife at close quarters.

Rare and endangered species. In addition to viable populations of forest elephants, significant populations of the critically endangered Western Lowland Gorilla and the endangered Chimpanzee occur throughout the area. Other rare animal species include the Oustalet’s red colobus and the bare headed rock fowl. An important value, unique to this area, is the use of tools by both gorillas (which have been observed using branches to test the depth of water in bais) and chimpanzees (which use tools to feed on honey, termites and ants). As well as these rare and endangered mammals and birds, the site protects a large number of tree species which are heavily exploited elsewhere, such as the critically endangered ‘Mukulungu’.

CONSERVATION STATUS AND PROSPECTS: The core area of the world heritage site is well protected and ecologically intact, but there are significant emerging concerns about its long-term prospects. On a positive note, the landscape comprises a totally protected core area surrounded by an extensive buffer zone where sustainable logging is practised. This provides long-term protection for key elements of the landscape, preventing it from being converted to other forms of land use, such as agriculture. Management is well supported by international non-governmental conservation organisations and there is a substantial trust fund endowment to provide for its long-term financial needs. However, there are concerns about management of the logging concessions where (although most concessions are operating under sustainable forest management plans and timber is certified as coming from ‘sustainable sources’ by the Forest Stewardship Council), new roads built for logging are encouraging an influx of people, new settlements are developing and wildlife is being hunted for a thriving commercial bushmeat trade. Much greater effort is required to tighten up law enforcement in the forestry concessions, especially in relation to hunting and illegal settlement. In addition mining exploration concessions recently granted in Congo and mining exploitation in CAR (partially encroaching on the property and its buffer zone) are of significant concern. Furthermore, the existing political commitment to cross border collaboration needs to be translated into more concrete management actions on the ground.

MANAGEMENT EFFECTIVENESS: Management is supported by external partners, and is quite well financed and reasonably effective. Innovative inter-governmental agreements for the coordinated management of the trans-border site have been made (a first for central Africa) indicating a strong political commitment. This needs to be translated into more effective concrete actions on the ground, including increased government budgets, sustainable development of parks personnel and institutions, and more effective law enforcement. Threats to conservation originating in the buffer zone, such as the unsustainable hunting of wildlife for bushmeat and ivory poaching, remain a major challenge in all three countries, and monitoring of these issues needs to be strengthened. The development of tourism, as an economic driver for conservation, is a long-term goal but insecurity, and difficult access are likely to remain significant constraints for the foreseeable future. High-value ‘sport hunting’ by foreign clients is allowed in the buffer zones and revenues are shared with local communities, but the modalities of establishing suitable quotas and other aspects of managing this activity need to be improved.

REVIEW OF CONSERVATION ISSUES AND THREATS: The following issues represent specific threats to the ecology, conservation and values of the Sangha Trinational world heritage site.

Poaching and commercial hunting. Elephant poaching for ivory and hunting of a wide variety of species for the commercial bushmeat trade constitute the biggest single threat to the integrity of the site. Although the core area of the site is relatively well protected, poaching is widespread in the buffer zones, and the level of control varies between logging concessions. Elephants have been particularly badly affected by poaching in recent years, and their populations have plummeted, at least around Congo’s portion of the site (the only area where reliable data are available). Bushmeat hunting tends to be associated with the construction of every new logging road, unless specific measures are taken to control it, and some irresponsible logging companies encourage hunting to avoid the cost of providing meat to their workers. In addition to poaching for ivory and bushmeat, there is a significant illegal trade in grey parrots and green pigeons captured for the international pet trade (particularly in the Cameroonian sector of the site).

Commercial sport hunting. High-value ‘sport hunting’ by international clients is carried out in the buffer zones of Cameroon and Congo. Although the offtake from this activity is thought to be low, hunting quotas have little scientific basis and controls are lax, so it may present a threat to specific target species.

Logging. Although there is no logging in the core area of the world heritage site, most of the buffer zone is managed for sustainable timber production. Timber operations lead to an influx of people, starting with salaried workers, who are quickly joined by extra ‘service’ people, taking advantage of economic opportunities in the logging camps, and leading to their rapid expansion. Logging companies have generally not been successful in limiting the numbers of people living in their camps, so hunting pressure and deforestation for slash-and-burn agriculture tends to increase in the vicinity of these camps. There are legal requirements on logging companies to provide tangible economic benefits to local communities and regulate potentially damaging activities in their concession areas (such as the expansion of settlements, influx of people, development of agriculture, hunting, etc) but these are rarely implemented effectively.

New roads and improved access. The road network in the buffer zone concessions, including motorable border crossings, has been very rapid over the past decade or so. This threatens the world heritage values of the site because a) it has made previously “pristine” areas accessible for hunting, and b) enabled bushmeat to reach distant urban markets quickly and efficiently. As the buffer zone forests are progressively depleted of their wildlife there will be increasing pressure on the last remaining “healthy” wildlife populations within the core area of the site.

Mining. Small-scale (mostly illegal) artisanal mining for diamonds and gold is widespread in the buffer zones where it is accompanied by deforestation, pollution of waterways and hunting. Mining camps tend to attract other people engaged in ‘support’ activities – gold and diamond dealers, general tradesmen, hunters, etc – leading to the rapid development of more significant settlements, with all the associated conservation and management problems. This is not yet a major threat to the site, but is something that requires management. Larger scale mining developments are underway in forested area outside the buffer zone (at a distance of 150-200km), creating new pressures for bushmeat etc sourced from local areas. Two mining exploration concessions that will infringe on the property and its buffer zone have been granted recently in the Congo, and a mining exploitation permit for gold and diamonds has been awarded in a nearby area in the Central African Republic.

Agricultural encroachment. A limited amount of slash-and-burn agriculture occurs in the buffer zone, but this is still at a relatively small scale and not yet a major threat to the site.

Outbreak of diseases affecting wildlife. There is a significant risk of an outbreak of disease amongst the great apes which could decimate populations of these endangered species. Gorillas and chimpanzees were both devastated by an outbreak of Ebola in Odzala National Park (not far away in northern Congo) between 2002 and 2004 when several tens of thousands of gorillas died. An earlier outbreak in north-eastern Gabon and north-western Congo decimated populations there between the mid 90s and 2004, so it may only be a matter of time before an outbreak occurs in the Sangha Trinational. 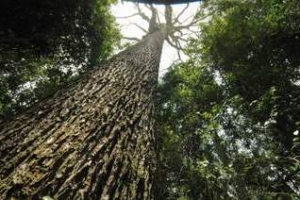