You are here: Home1 / All featured sites2 / Comoé National Park

EXPLORE IVORY COAST’S COMOE NATIONAL PARK with this slideshow, check the location map and get all the facts and information below. 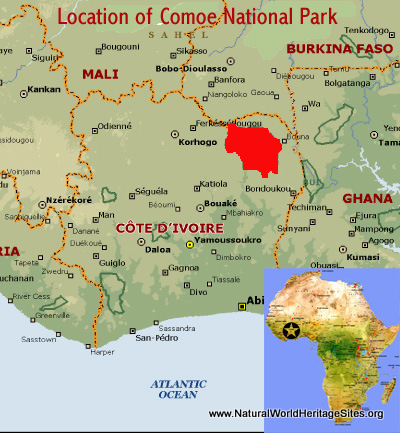 Values: The largest national park in West Africa, this savanna-woodland park supports an enormous diversity of animals and plants in a large variety of habitats. Species lists include 1,200 plants, 155 mammals, 71 reptiles and 504 species of birds – almost as many as the entire United States (which has 650 bird species). The recent unrest in Côte d’Ivoire has had a very adverse effect on the site, with extensive poaching of wildlife and fires caused by poachers, over-grazing by large herds of cattle and the absence of effective management over two thirds of the Park.

REVIEW OF WORLD HERITAGE VALUES: The specific attributes which qualify Comoe National Park for world heritage status can be summarised as follows:

Exceptionally diverse flora and fauna. The park has a remarkable diversity of flora and fauna. So far 1200 species of vascular plants, 160 species of mammals, 504 species of birds, 71 species of reptiles, 35 species of amphibians and over 60 species of fish have been documented. The mammal fauna includes 14 species of primates (including nine diurnal species – Anubis baboon, green monkey, Diana monkey, Mona monkey, lesser white-nosed monkey, white collared mangabey, black and white colobus and chimpanzee); while the bird list includes four of the six West African species of stork, and five of the region’s six vulture species.

High number of endemic sub-species and varieties. A number of the park’s plants and animals are distinctive sub-species or varieties which used to be widespread across West Africa, but are now limited to a few remaining protected habitats in parks and reserves. Comoe represents one of the few remaining natural ecosystems with a reasonably-complete assemblage of these unique forms.

Occurrence of rare and endangered animal species. A number of the park’s mammals, birds and reptiles are included on IUCN’s Red List of ‘Endangered’ species, including elephant, chimpanzee, Diana and white-thighed colobus monkeys and the ‘Near-Threatened’ bongo, hyaena, tree pangolin and giant mastiff bat. Amongst the birds, the Lappet-faced vulture and brown-cheeked hornbill are classified as ‘Vulnerable’ while the Ruppell’s vulture is listed as ‘Endangered’ and the black-crowned crane, Denham’s bustard, yellow-casqued hornbill, pallid harrier and great snipe are ‘Near-Threatened’. Three species of crocodiles are found in the park, including the ‘Vulnerable’ dwarf crocodile.

Exceptional diversity of ecosystems. Comoe National Park supports a remarkable diversity of ecosystems, resulting from its location in a transitional area between the closed-canopy Upper Guinea forests and the drier deciduous woodlands of the Sudanian ecological region. While much of the park is covered in deciduous woodland, there are significant areas of closed-canopy gallery forests, flood plains, seasonally-inundated grasslands, freshwater swamps and ponds associated with old river ox-bow lakes, dense dry forests, rocky slopes and granite outcrops. The park’s geomorphology comprises wide plains with deep ridges carved by the Comoé River and its tributaries (Bavé, Iringou, Kongo), while rocky inselbergs occur along a north-south line, forming isolated massifs and small chains of hills that rise to 5-600m in altitude.

CONSERVATION STATUS AND PROSPECTS: The park was added to the official List of World Heritage In Danger in 2003, following the outbreak of the country’s first civil war in 2002, and the abandonment of management efforts. During the period of socio-political crisis that followed illegal activities, such as poaching, cattle grazing and agriculture proliferated. The combination of these threats has had a severe impact on the already disturbed natural values of the park, especially its populations of large mammals. At least four species of large mammals are believed to have become extinct within the last 100 years – wild dog, black rhino, cheetah and most recently lion. Others, including elephant and chimpanzee may remain in the park as tiny remnant populations that may no longer be viable. Old animal census records indicate that between 1978 and 1998 there was an 85% decline in the numbers of 11 species of large mammals (due to poaching), and an aerial census in 2010 indicated a decline of 92% on the 1978 figures. In addition to the impact of poaching on large mammal populations, the vegetation and diverse habitats of the park have suffered significant disturbance from illegal human activities, especially cattle grazing and agriculture, as well as bushfires.

While the overall outlook for the park remains highly uncertain, it is worth noting that Comoe’s large size endows it with a high degree of natural resilience. It is likely that most of the park’s species are still present and could recover if adequate protection can be provided over a sufficiently long period.

MANAGEMENT EFFECTIVENESS: Management problems clearly began long before the recent socio-political turmoil, as indicated by the steep decline in large mammal populations between 1978 and 1998. From 2002 to 2010, during the civil unrest, park management was completely withdrawn and this clearly contributed to further dramatic declines in large mammal populations. Some management efforts resumed in 2010, supported by international assistance and funding. However, a World Heritage Centre/IUCN monitoring mission in 2013 found major shortcomings and continuing problems with poaching and cattle grazing in particular.

The management authority (OIPR) carried out aerial censuses in 2010 and 2014, in association with the Wild Chimpanzee Foundation. These indicated an increase in the estimated population of large mammals over this four-year period, from a mean estimate of 11,090 in 2010 to 15,075 in 2014, while the number of cattle grazing illegally in the park fell dramatically over the same period. While the recovery of mammal populations is clearly encouraging it should be noted that the 2014 estimate indicates an overall loss of 89% when compared with the 136,400 large ungulates recorded in 1978. Ground surveys carried out in 2012 found just two elephant tracks, and no evidence of chimpanzees, suggesting that these two species may be on the verge of local extinction.

Poaching/illegal hunting. Commercial poaching by professional hunters and illegal subsistence hunting by local people for bushmeat constitute the main threats to the park. The absence of management during the 8-year period of civil unrest resulted in an intensification of poaching, which still continues despite recent efforts at control.

Illegal grazing of cattle. The absence of management between 2002 and 2010 allowed herdsmen to bring their cattle into the park to take advantage of the abundant grazing. During the 2010 aerial survey, 90% of all animals seen in the park were cattle, but they had been almost eliminated by the time of the 2014 survey. Cattle grazing can impact park ecology in several ways, displacing wildlife from prime grazing areas and affecting regeneration of forest areas.

Fire. Fire is used by herdsmen to stimulate new growth for their cattle, and by poachers to drive animals out of cover so that they can be more easily seen and killed. Wild fires started in this way often spread over wide areas, burning forest margins and altering the process of ecological succession in many habitats.

Mining. There is a certain amount of small-scale artisanal panning for alluvial gold in local rivers and streams, which may pollute waterways and disturb important riverine habitats, but its impact has not been properly assessed. There were reports that government had issued three mineral exploration licenses covering parts of the park (in 2008), and this would (if confirmed) be potentially damaging and clearly incompatible with the park’s status as a world heritage site. 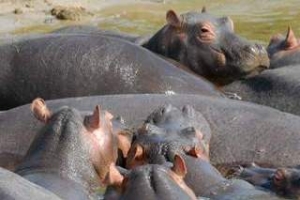 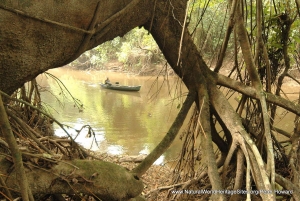