EXPLORE SEYCHELLES’ VALLÉE DE MAI NATURE RESERVE with this slideshow, check the location map and get all the facts and information below. 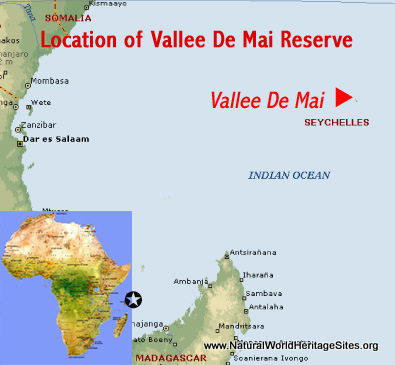 Values: The Vallee De Mai is a small area located within the 7 km2 Praslin National Park on the Island of Praslin, one of 115 Seychelles islands spread across a swathe of the Indian Ocean northeast of Madagascar. It is the smallest of Africa’s natural world heritage sites, but it satisfies all four of the Convention’s natural criteria. It’s most extraordinary feature is a forest of ‘Coco de Mer’ palms which produce the largest seed of any plant in the world. The massive ‘sea coconut’ can weigh up to 20 kg, takes 7 years to mature, and has been the subject of all sorts of myths and legends because of its erotically-shaped bi-lobed form.

The Vallee de Mai has been described as a ‘living museum’ because it supports a community of plants that existed before the evolution of more advanced plant families. It is the only place where all six of the Seychelles endemic palm species occur together, and there are many other endemic and threatened species of flora and fauna. These include 14 species of reptiles (caecilians, geckos, skinks and snakes) that are endemic to the Seychelles, and a unique tree frog. The area falls within one of Birdlife International’s Important Bird Areas, and supports populations of rare endemic birds including black parrot, blue pigeon, Seychelles kestrel, bulbul, sunbird and swiftlet.

REVIEW OF WORLD HERITAGE VALUES: According to IUCN’s Conservation Outlook Assessment (2014), the specific attributes which qualify the Vallée de Mai Nature Reserve for world heritage status can be summarised as follows:

Outstanding example of an earlier major stage in the evolutionary history of the world’s flora. Shaped by geological and biological processes that took place millions of years ago, the Vallée de Mai illustrates what other tropical areas would have been like before the advent of more advanced plant families. The site is an outstanding example of an earlier and major stage in the evolutionary history of the world’s flora.
Outstanding example of biological evolution dominated by endemic palms. The palm forest provides an outstanding example of biological evolution in an isolated oceanic island situation. The site’s low and intermediate-altitude palm forest is characteristic of the Seychelles and is preserved in something resembling its primeval state. No other island in the Indian Ocean possesses the combination of features found in the Vallee De Mai Nature Reserve. Here the ancient endemic palms form a dense forest, mixed with Pandanus screw palms and broadleaf trees. These together constitute an ecosystem where unique ecological processes and interactions of nutrient cycling, seed dispersal, and pollination occur.
Extraordinary diversity of rare and endemic palm species. The Vallée de Mai is the world’s stronghold for the endemic Coco de Mer palm (Lodoicea maldivica), which famously has the largest seed of any plant in the world – a giant bi-lobed nut, weighing as much as 20 kg. There are also five other endemic species of palms, making this the only area in the Seychelles where all six endemic species occur together. The other endemic palm species are: Millionaire’s salad (Deckenia nobilis), Thief palm (Phoenicophorium borsigianum), Seychelles stilt palm (Verschaffeltia splendida), Latanier Millepattes palm (Nephrosperma vanhoutteanum) and Latanier palm (Roscheria melanochaetes).
Large number of endemic animal species supported by the palm habitat. The palm forest is relatively pristine and provides a refuge for many endemic animal species, including the black parrot (which is restricted to Praslin Island and totally dependent on the Vallée de Mai and surrounding palm forest). Other species supported by the palm habitat include three endemic species of bronze gecko, endemic blue pigeons, bulbuls, sunbirds, swiftlets, Seychelle’s skinks, burrowing skinks, tiger chameleons, day geckos, caecilians, tree frogs, freshwater fish and many invertebrates.
Exceptional natural beauty of the palm forest. The natural formations of the palm forests are of great aesthetic appeal with dappled sunlight and a spectrum of green, red and brown palm fronds. The natural beauty and near-natural state of the Vallée de Mai are impressive, even to those visitors who are not fully aware of the ecological significance of the forest.

CONSERVATION STATUS AND PROSPECTS: The overall outlook for conservation of the site is good, as there are few external threats and a competent management agency is in place.However, the future of the Coco de Mer palm is of some concern, since it is currently under significant threat from illegal collection and over-exploitation for its nuts and kernel. The Seychelle’s Government and the management agency are implementing targeted conservation measures, including efforts to tighten the legislation to protect the species.

MANAGEMENT EFFECTIVENESS: The protection and management of the Seychelles’ two World Heritage Sites (Vallée de Mai Nature Reserve and Aldabra Atoll) is carried out by the Seychelles Islands Foundation (SIF), a public trust established by government with an independent Board of Trustees. The SIF is committed to ensuring that both its protected areas are well-managed and financially viable, with conservation, research, education and nature-based tourism suitably balanced. Generally, management of this small site is effective and science-based, with necessary community outreach and provision of facilities and interpretation for approximately 80,000 visitors annually. An EU-funded project was begun in 2012 to survey and control invasive alien species, a specially critical conservation issue for many oceanic islands, including the Seychelles. Other management priorities for the Nature Reserve include increasing the capacity for technical and scientific management; increasing the effective size of the reserve and its connectivity within the wider landscape; creating a legally designated buffer zone; increasing anti-poaching; controlling the commercial exploitation of the Coco de Mer seeds; and increasing the number of Coco de Mer plants through supplementary planting.

REVIEW OF CONSERVATION ISSUES AND THREATS: In general the Vallee De Mai Nature Reserve is well protected and faces few significant threats. However, the following issues have been identified as specific threats to the ecology, conservation and values of the site.

Illegal collection (poaching) of Coco de Mer nuts. The Illegal collection of Coco de Mer nuts in Vallée de Mai has become a problem in recent years due to the high value of its nuts and kernels. Up to 50 nuts a year are poached from the site. Poachers often climb the palms and cut off the entire fruiting body including mature and immature nuts. This appears to stop female trees from producing new inflorescences for up to 3–5 years, with potential implications for the regeneration of the forest. The illegal collection of Coco de Mer nuts has been increasing in recent years, requiring additional patrol effort.
Invasive Alien Species. The threat of invasive alien species is high and a recent survey found that 53% of the 93 plant species found in the reserve were introduced species. In addition, ‘Yellow Crazy Ants’ (Anoplolepis gracilipes), one of the most notorious invasive species in the world, were discovered in the Vallee De Mai Nature Reserve in 2009. Research and monitoring is being carried out to evaluate the extent of the threat posed by these species and develop suitable control methods.
Fire. The possibility of a devastating fire at the site is very real, given thehigh volume of fallen dry palm leaves lying on the ground. The risk is exacerbated by the existence of a public road through the adjacent Praslin National Park. There is currently no fire prevention and action plan, and the capacity to tackle any possible outbreak of fire is very limited.

The slideshow provides a comprehensive overview of the Seychelles’ Vallée de Mai Nature Reserve, a small area designated as a World Heritage Site within the larger Praslin National Park. It shows the area’s forested landscapes, wildlife habitats, endemic palms and other threatened plant and animal species. The reserve provides sanctuary to some 4000 of the island’s iconic coco de mer palms, and examples of the massive bi-lobed nuts, husks and leaves of these plants are shown, as well as some of the facilities and typical visitor experiences. 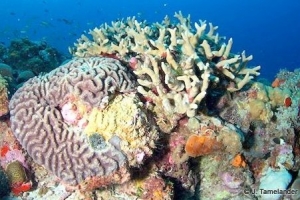 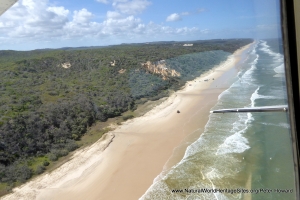