You are here: Home1 / All featured sites2 / Aldabra Atoll

EXPLORE SEYCHELLES’ ALDABRA ATOLL with this slideshow, check the location map and get all the facts and information below. 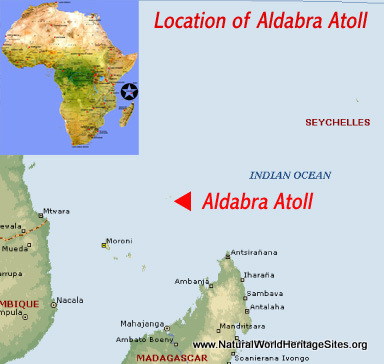 Values: Aldabra is one of the largest coral atolls in the world, a ring of four islands enclosing a shallow tropical lagoon, surrounded by a fringing reef. It is located in a very remote part of the eastern Indian Ocean, about 1,000 km west-south-west of the main Seychelles group, 400 km north-west of the northern tip of Madagascar and 600 km from the East African coast. The four islands have been built up from the sea bed and represent the top of a coral limestone ‘cap’ varying in thickness from 0.6 to 1.6 km. They show a complex history of emergence and submergence, and today lie about 8 metres above sea level. The ring of islands, with its enclosed lagoon covers an area about 34 km long and 14 km wide, with each island being about 2 km wide.

The remote location of Aldabra and the lack of fresh water have meant that it has largely avoided the attentions of passing ships and remains relatively pristine, a place where ecological processes have continued unaffected by humans. It supports more than 400 endemic species and subspecies of flora and fauna, including most notably a population of around 100,000 Aldabra Giant Tortoise, the world’s largest tortoise. The main ecological features of the atoll include its prolific unspoilt coral reefs, lagoon, sea-grass beds and mangrove mudflats; and the scrubby dry vegetation characteristic of the islands. It is recognised by Birdlife International as an Important Bird Area, and is home to the last of the western Indian Ocean flightless birds, the Aldabra rail (all the others have gone the way of the Dodo, driven to extinction).

REVIEW OF WORLD HERITAGE VALUES: According to IUCN’s Conservation Outlook Assessment (2014), the specific attributes which qualify Aldabra Atoll for world heritage status can be summarised as follows:

Globally significant raised limestone atoll. The Aldabra Atoll is one of the largest coral atolls in the world, and one of only two such atolls that are not heavily impacted by human activities. It consists of four main islands of coral limestone separated by narrow sea passages and enclosing a large shallow lagoon. The lagoon contains many smaller islands and the entire atoll is surrounded by an outer fringing reef.
Giant tortoises. Aldabra has the world’s largest population of giant tortoises (about 100,000 animals), and is one of only two places in the world where giant tortoises survive (the other being Galapagos). Giant tortoises of many taxa were once widespread, in high densities, on islands around the world until humans exterminated them – collecting them as ‘live food’ for passing sailors, or through the introduction of predators. The tortoises are the last survivors of a life form once found on other Indian Ocean islands and Aldabra is now their only remaining habitat. The tortoise population is entirely self-sustaining with all the elements of its intricate interrelationship with the natural environment in place.
Large number of endemic plant species and unique plant communities. Due to Aldabra’s extremely isolated location, its plants have evolved in unique ways and a high proportion of species are endemic. A variety of distinct plant communities has also developed, as a result of the size and physical diversity of the atoll. Amongst these plant communities, the ‘tortoise turfs’ are unique to Aldabra. They are relatively diverse grass-dominated areas, maintained through heavy grazing pressure by the giant tortoises, and represent a habitat that was possibly widespread on other oceanic islands where tortoises used to occur.
Significant number of endemic birds and seabird colonies. Aldabra has two endemic bird species (Aldabra Brush Warbler and Aldabra Drongo), and another eleven birds which are represented by distinct subspecies. These include the White-throated Rail, which is the last remaining flightless bird in the Western Indian Ocean. There are vast seabird colonies including the second largest frigatebird colony in the world and one of the world’s only two oceanic flamingo populations.
Highly significant breeding ground for green turtles and hawksbill turtles. Aldabra is a highly significant breeding ground for green turtles and hawksbill turtles, both of which are globally endangered species.
Outstanding example of ongoing evolutionary processes in an oceanic island ecosystem. Aldabra is an outstanding example of an oceanic island ecosystem in which evolutionary processes are active and involve relatively complex ecological interactions (due to the large size of the atoll and its rich biota). Most of the land surface comprises ancient coral reef which has been repeatedly raised above sea level over a period of about 125,000 years, and an accelerated period of ecological change can be anticipated as a result of climate change and the associated rise in sea levels. The size and physical diversity of the atoll provides it with a high degree of ecological resilience.

CONSERVATION STATUS AND PROSPECTS: Aldabra Atoll remains one of the most remote and undisturbed island ecosystems in the world, and the outlook for its conservation is considered to be good, despite some concerns. The potential impacts of climate change are largely unknown, but might be associated with coral bleaching (if sea temperatures rise significantly) and loss of dry-land habitat (as sea levels rise and submerge coastal areas), with corresponding knock-on effects for marine and terrestrial ecosystems. As with any oceanic island, the threat to native fauna and flora from invasive alien species is ever-present and requires vigilance to monitor and control the species concerned.

MANAGEMENT EFFECTIVENESS: The protection and management of Aldabra Atoll (and the Seychelles’ other World Heritage Site, the Vallée de Mai Nature Reserve on Praslin Island) is carried out by the Seychelles Islands Foundation (SIF), a public trust established by government with an independent Board of Trustees. The SIF is committed to ensuring that both its protected areas are well-managed and financially viable, with conservation, research, education and nature-based tourism suitably balanced. Generally, management of Aldabra is very effective, science-based, and well-resourced (mostly from revenues generated at Vallee De Mai, but with additional project finance from the international community, notably the EU and GEF). In view of the risks associated with invasive alien species, an updated risk-assessment and management plan for introduced/invasive species remains an outstanding requirement.

REVIEW OF CONSERVATION ISSUES AND THREATS: The following issues represent specific threats to the ecology, conservation and values of the Aldabra Atoll world heritage site.

Invasive Alien Birds and Mammals. Two species of bird and three mammals have become established on Aldabra and have been the subject of recent study and control efforts. All these species threaten the native fauna by damaging native vegetation and habitats (in the case of goats), predating native animals (in the case of black rats and cats), out-competing native species (in the case of the red-whiskered bulbul) or hybridizing with closely related native species (in the case of the Madagascar fody). Fortunately a successful eradication programme for goats was completed in 2012, followed by eradication of the red-whiskered bulbul in 2013. Black rats have been identified as the most damaging invasive rodent to island ecosystems, and rats in general are associated with the greatest number of declines or extinctions of native island biota. However it seems that neither rats nor cats seem able to reach ‘pest’ proportions on Aldabra, and efforts to eradicate them are well underway.
Invasive Alien Plants. There are several alien plant species on Aldabra that are known to be invasive elsewhere, and research is needed to assess their impact and decide on appropriate control/eradication methods. One of these – sisal, a large succulent plant originating from central America – has been subject to control efforts since the 1970s, while others are well established and have only recently become subject to proper assessment. These include the She-oak (an evergreen tree, Casuarina equisetifolia) and several invasive herbs, including the Madagascar periwinkle (Catharanthus roseus) and the Porterweed (Stachytarpheta jamaicensis). Both of these herbs seem to be spreading and can dominate the ground vegetation, where tortoises seem to avoid eating them.
Sea-borne litter and plastic debris. Aldabra is a remote place, but its coastline is littered with trash brought in by the tide (plastic products of all kinds, fishing nets, rope, etc.). The impact of this debris on the island’s fauna and ecosystems has not been properly assessed.
Water Pollution A potential risk is that of a major oil- or chemical spill from ships. While the risk is small, the potential for massive damage is great.
Climate change. The impact of climate change is potentially very high, although largely unpredictable. It is likely to result in rising sea levels (due to melting of the world’s polar ice), which will submerge coastal areas, thereby reducing Aldabra’s land area. Rising sea temperatures have already caused episodes of ‘coral bleaching’ and these are likely to become more frequent, with unpredictable consequences for the offshore reef systems. A warmer climate may also impact the functioning of terrestrial ecosystems in a variety of ways.

The slideshow provides a comprehensive overview of Seychelles’ Aldabra Atoll, showing the atoll’s marine and terrestrial landscapes, underwater vistas, wildlife habitats, and some of the endemic birds, plants and animals that occur on the island. 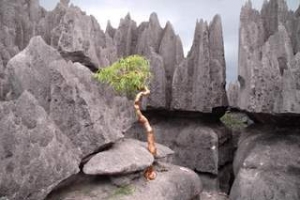 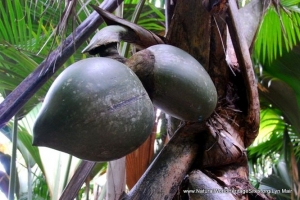