Islands and Protected Areas of the Gulf of California

EXPLORE Islands and Protected Areas of the Gulf of California with this slideshow, check the location map and get all the facts and information below. 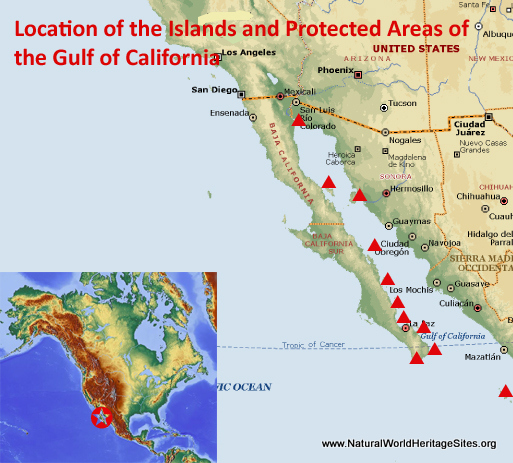 Location and Values: The Islands and Protected Areas of the Gulf of California are located in north-western Mexico, scattered across the Sea of Cortez from the Colorado River delta in the north to the tip of the Baja California peninsula, 270 km further south. This is a serial site, comprising 244 islands and islets (clustered in eight major groups) and nine other protected areas with coastal and marine zones. It is globally important for marine conservation, and serves as a natural laboratory for the study of speciation (in much the same way as the Galapagos Islands).

A quarter of the designated area is terrestrial, forming part of the Sonoran Desert, while the rest is marine. It is an area of exceptional natural beauty, its coastal deserts and rugged islands set in the turquoise waters of the Sea of Cortez, with equally spectacular sub-marine scenery attracting divers from around the world. From a marine conservation perspective, the site is exceptional in terms of biodiversity and marine productivity, supporting 900 species of fish (10% endemic), 39% of the world’s marine mammals and a third of its marine cetaceans. Amongst these marine species, there are critically endangered species of fish (such as Black Sea Bass and Totoaba) and a tiny remnant population of the critically endangered endemic Gulf Porpoise (or Vaquita). Huge colonies of California Sea Lions, five species of dolphins and 11 species of whale are protected in the site.

The islands provide exceptional opportunities for the study of the processes of biological speciation. Some of them were connected to one another by land bridges at different times in the past (and were therefore colonized quite easily by plants and animals arriving overland from adjacent areas) while others have never been connected by land and were colonized by quite different suites of species that managed the crossing by sea or through the air. The different environmental conditions of each island have subsequently led to evolutionary changes and adaptation by the original colonizers. This has resulted, for example, in a diverse reptile fauna with 115 known species, almost half of which are endemic, in some cases even to individual islands.

Conservation Status and Prospects. According to IUCN’s Conservation Outlook Assessment (2017) the conservation status of the Islands and Protected Areas of the Gulf of California is of ‘significant concern’. The IUCN report notes that the main threat to the site’s world heritage values comes from artisanal and industrial fishing, much of which is carried out beyond the boundaries of the world heritage site. In particular, illegal gillnet fishing throughout the Upper Gulf is resulting in significant by-catch of Vaquita, a critically endangered endemic cetacean, now considered to be on the verge of extinction. It is also likely to be threatening other cetaceans, turtles, seals, sharks and fish species, including the critically endangered totoaba fish.

More generally, management of individual protected areas within this serial site is effective, but they face multiple threats from outside their boundaries. These include the impacts of over-fishing, by-catch, pollution, alien invasive species, tourism development and climate change. Pollution from agricultural, shipping and coastal developments is increasing, while mangrove habitats are badly affected by development of recreational facilities. The impacts of climate change are not yet fully understood but are likely to significantly affect corals, other calcifying organisms, and coastal wetlands, as well more general marine productivity and fish stocks.

The slideshow ‘tells the story’ of the Islands and Protected Areas of the Gulf of California with a portfolio of photos by Peter Howard from a visit in January 2020. It illustrates the diversity of landscape features at different locations, together with some of the typical plants and animals. The slideshow starts with an introductory trio of ‘overview’ photos and then follows a journey through various locations of this geographically-spread serial site. It starts in the far north of the Gulf of California, where the Colorado River has created a wide delta and extensive mudflats, flanked by sand dunes with the occasional outlying colony of mangroves. Following the Baja California peninsula southward, the photos illustrate some of the spectacular plant communities typical of the Sonoran desert which dominate the terrestrial parts of the site, highlighting its great diversity of cacti. Towards the southern end of the peninsula, the town of Loreto (with its sunny promenade adorned with impressive statues of whales and sea lions) serves as a principal access point for visitors to some of protected islands in this part of the Gulf of California. The photos illustrate two easy boat trips out of Loreto, the first to Isla Coronado and the second to Isla Danzante. Highlights of these short excursions include the colony of California Sea Lions hauled up on rocks and playing in the waters around Isla Coronado, and some impressive pods of dolphins exploring the shallow waters in sheltered bays around the island. Isla Danzante is perhaps more scenically spectacular, with its high rocky cliffs, headlands and sheltered bays (but a little less impressive for the abundance of its wildlife).

The second half of the slideshow is centred on the Bahia de los Angeles area further north. This protected coastal bay includes a diversity of terrestrial and marine habitats, with an archipelago of interesting islands which visitors can explore on foot. The northern part of the bay is a designated wetland of international importance (RAMSAR site), where wading birds congregate. The offshore islands vary in size and interest, some serving as isolated rocks where seabirds (pelicans, cormorants and boobies) congregate in great numbers, while some of the larger islands provide spectacular vistas with their sheltered bays, beaches, geological features, a diversity of cactus vegetation and far-reaching views to neighbouring islands and mainland areas of Baja California. The slideshow ends with a series of photos of some spectacular columnar cacti on the mainland, reaching perhaps 15m in height, where large numbers of turkey vultures roost at night. 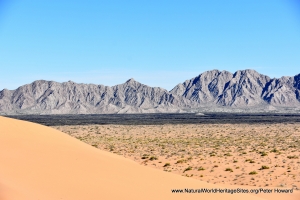 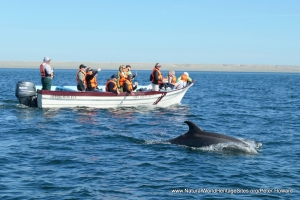