You are here: Home1 / All featured sites2 / Mosi-oa-Tunya/Victoria Falls

EXPLORE THE MOSI-OA-TUNYA/VICTORIA FALLS with this slideshow, check the location map and get all the facts and information below. 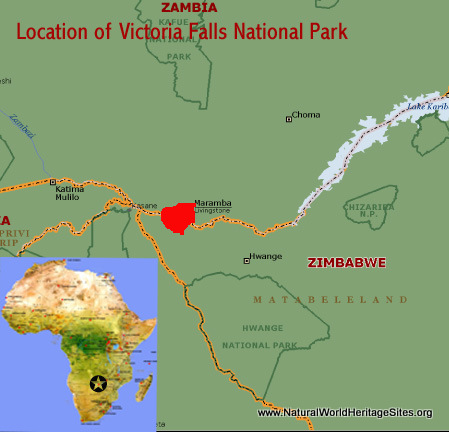 Values: Mosi-oa-tunya/Victoria Falls is perhaps Africa’s single most outstanding feature, and one of the most spectacular waterfalls in the world. The Zambezi River, which is more than two kilometres wide at this point, plunges 108m into a narrow chasm and noisily down a series of basalt gorges. The world heritage site covers both banks of the Zambezi River, including the Victoria Falls National Park on the Zimbabwe side and the Mosi-ao-Tunya National Park in Zambia. When the river is in full flood in February and March, it forms the world’s largest sheet of falling water with some 540 million cubic meters of water per minute pouring over the edge and creating a spray plume which is visible 20km away. The local name for the falls – Mosi-oa-Tunya – means the ‘smoke that thunders’, a suitable description for a place that stirs every sense.

CONSERVATION STATUS AND PROSPECTS: The Mosi-oa-tunya/Victoria Falls is one of Africa’s greatest natural spectacles and already receives a correspondingly large number of visitors from around the world. The immediate vicinity of the falls is protected within three adjoining national parks which ensure that visitors can appreciate its natural values in a pristine, un-spoilt setting. These remarkable qualities, which distinguish this site from some of the world’s other major waterfalls, will be challenged as visitor numbers and development pressures increase. Effective regulation and control of tourism development pressures, especially the development of physical infrastructure too close to the falls, will be the single greatest challenge for site managers.

MANAGEMENT EFFECTIVENESS: Compared with similar sites elsewhere in the world, the Mosi-oa-tunya/Victoria Falls park complex retains its sense of nature’s raw power, its aesthetic values and wilderness qualities remarkably well. However, protection and management programmes are severely constrained by budget and staffing limitations. Tourism revenues do not appear to be retained and re-invested at the property. Despite a series of thorough (donor-funded) reviews of strategic management needs initiated in 1996, implementation of protection measures has been weak and haphazard with poor co-ordination between the two state authorities and other agencies. Things have improved since the development of a Joint Integrated Management Plan in 2007, but there is still a long way to go.

THREATS: The following issues represent specific threats to the ecology, conservation and values of the Mosi-oa-tunya/Victoria Falls world heritage site. 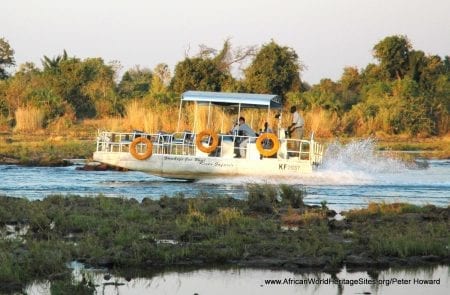 Inappropriate tourism infrastructure development. There are several hotels, restaurants, visitor centres, camps, boat moorings and other tourism facilities already established inside the parks, and a number of other infrastructure developments have been proposed. Developments such as a proposed new 160-room 5-star hotel and conference facility, and a tethered balloon close to the falls on the Zambian side could easily compromise the aesthetic values of the site. Such developments need to be subject to rigorous environmental and social impact assessment, and anything that is likely to appear above the skyline or be visible along the riverbanks must be avoided.

Inappropriate tourism activities. The Mosi-oa-tunya/Victoria Falls area has become a centre for ‘extreme sports’ with white-water rafting, bungee-jumping, abseiling and a gorge swing all in operation. As many as 40 river cruise boats operate from the Zimbabwean shore above the falls, and there are jet-boats, micro-light aircraft and helicopters in constant use. Many of these activities are noisy and impinge on the aesthetic values of the property. 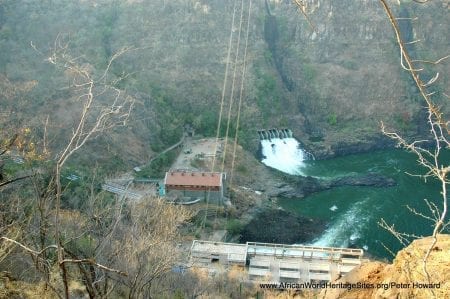 A 60MW hydro power plant on the Zambian side of the Victoria Falls uses as much as half of the water in the Zambezi during the dry season , diverting it away from the falls

Reduced water flows over the falls due to abstraction for hydro-power generation. A 60MW hydro-electric power station on the Zambian side of the falls requires 175 m3/s to operate at full capacity, representing a significant proportion of the Zambezi’s total flow during the drier months (flow rates below 400m3/s are usual from early September to mid-December).

Noise pollution. The noise of helicopters and micro-light aircraft carrying visitors to view the falls, as well as motorized cruise vessels on the Zambezi above the falls, is a constant nuisance, compromising the wilderness qualities of the site and its aesthetic value. Twenty boats and nine helicopters were reported to be operating at the site from 2007. 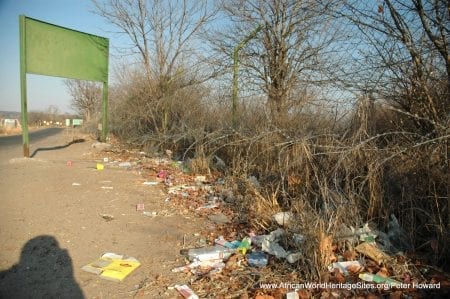 Waste management and pollution. Tourist and municipal wastes, including sewage, are polluting both land and water. The main sewerage ponds for the municipality of Livingstone require rehabilitation and are leaking untreated sewerage into the property. The power station complex within the property is reported to collect and dispose of all domestic and facility wastes (including oil) outside the property, but there is clearly a risk of leakages.

Road, rail and infrastructure corridor. Mosi-oa-tunya/Victoria Falls is bisected by a road and rail transport corridor which crosses the gorge immediately below the falls over the spectacular Falls Bridge. Associated with this corridor is an unsightly collection of fences and buildings, including the Zambian customs and immigration services. Further infrastructure within the parks includes the power station and its ancillary buildings

Illegal hunting. Poaching is reported to be an ongoing threat.

Spread of invasive species. Lantana camara is spreading aggressively and has colonized the cliff faces in the gorges. Water hyacinth is also present and may be obstructing water channels above the falls

Cattle grazing and cultivation. Some local people are said to be grazing their cattle and even cultivating land within parts of the site.

Urban growth and development in adjoining areas. The population and infrastructure of the towns of Victoria Falls (Zimbabwe) and Livingstone (Zambia), bordering the property, are expanding rapidly without adequate planning.

Upstream water abstraction and use. The Zambezi catchment covers a large part of western Zambia and south-west Angola, much of which may be suitable for irrigation, leading to water abstraction.

Excessive tourist use. Increasing the number of visitors to the falls is a key government policy on both sides of the border, but there are concerns over the visitor carrying capacity. Over the past five years numbers have varied between 220,000 and 350,000 per annum.

Batoka Gorge Dam. A 196m-high dam proposed for the Batoka Gorge would create a 50km-long lake and flood several of the gorges in the park, destroying the habitat of cliff-nesting birds.

The slideshow provides a comprehensive overview of the spectacular Mosi-oa-Tunya/Victoria Falls which straddles the border between Zambia and Zimbabwe. As well as showing the falls from a variety of vantage points on both sides of the border there is a series of aerial photos which clearly show the falls within their geological context as the Zambezi River has cut a zigzag series of gorges through the rock. Above the falls tourist boats ply the placid waters, while a variety of wildlife can be seen in the savanna woodland habitats along the river banks. Some of the characteristic plants and animals are shown, including large mammals – such as elephants, zebras, buffalo, and hippos. The slideshow illustrates some of the conservation management issues and some typical visitor experiences, including bungy jumping and white water rafting below the falls.

The specific attributes which qualify Mosi-oa-tunya/Victoria Falls for world heritage status can be summarised as follows:

Spectacular waterfall in pristine natural setting. One of the most spectacular waterfalls in the world, where the mighty Zambezi plunges over a sheer precipice almost two kilometres wide and falls 108 metres into a series of spectacular gorges. At peak flow, this is the world’s largest curtain of falling water, creating a plume of spray that rises 500 m into the air and can be seen 20 km away. The continuous spray provides sufficient water to maintain a strip of rainforest on the cliff-tops opposite the falls, and the pristine natural beauty of the place owes much to the riverine environment on either side of the falls. Above the falls the Zambezi flows relatively slowly, creating a series of wide channels and islands, with woodlands along its banks inhabited by a diversity of typical African megafauna – elephants, buffalo, giraffe, zebra and the like. Below the falls, the river plunges through a zig-zag series of sheer basalt gorges.

Ongoing geological process. The falls represent a stage in a geological process that has been ongoing for some two million years, involving the Zambezi River cutting through east-west fissures in the basalt plateau, forming a series of retreating falls. The zig-zag series of gorges below the present falls indicate the location of seven previous waterfalls, and the Devil’s Cataract (at the western end of the present falls) represents the start of the cutting back to an eighth location. The gorge system below the falls continues for some 110 km, with 16 km of this included within the world heritage property. 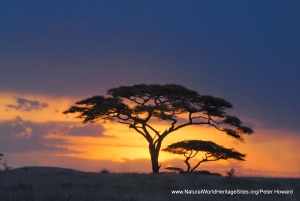 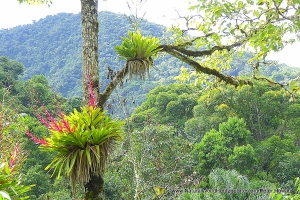