EXPLORE THE LAKE MALAWI NATIONAL PARK with this slideshow, check the location map and get all the facts and information below. 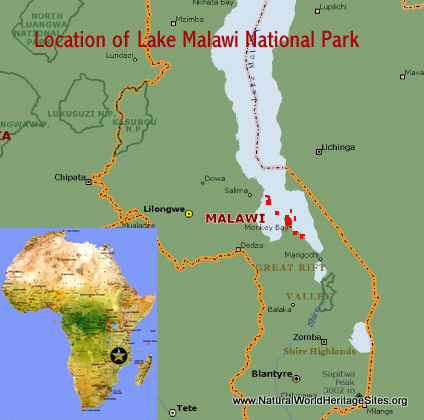 Values: Located at the southern end of Lake Malawi, this National Park includes 16 separate components – four shoreline areas and 12 islands of varying size, together with the lake waters within 100m of the shore. The lake, with its deep clear waters and varied habitats, contains the largest number of fish species of any lake in the world: 3,000 in all with more than 800 species of Cichlidae. These are mostly small brightly coloured mouth-brooding fishes that live amongst the rocks close to the shore. All but five species occur nowhere else in the world, and the degree of adaptive radiation and the explosiveness of the speciation is remarkable and not yet wholly explained. Their importance for the study of evolution by adaptive radiation is comparable with that of the Galapagos Islands finches. A comprehensive review of the world heritage values of the site is provided below, together with details of the area’s conservation status and the threats it faces. One of the world’s largest, deepest, most ancient, freshwater lakes: Lake Malawi is Africa’s third largest lake (31,000 km2) and the eighth largest in the world. It fills a stretch of Africa’s Great Rift Valley approximately 580 km long and 75 km wide, reaching depths of more than 700 m. Although estimates of its age vary (from 40,000 to one or two million years), it is regarded as an ‘ancient’ lake in global terms. It has a comparatively small catchment of about 130,000 km2, most of it in Malawi, and its outflow feeds the Shire River, a tributary of the Zambezi. The world heritage property includes just 7km2 of the lake’s vast expanse, amounting to just 0.02 % of its total area. 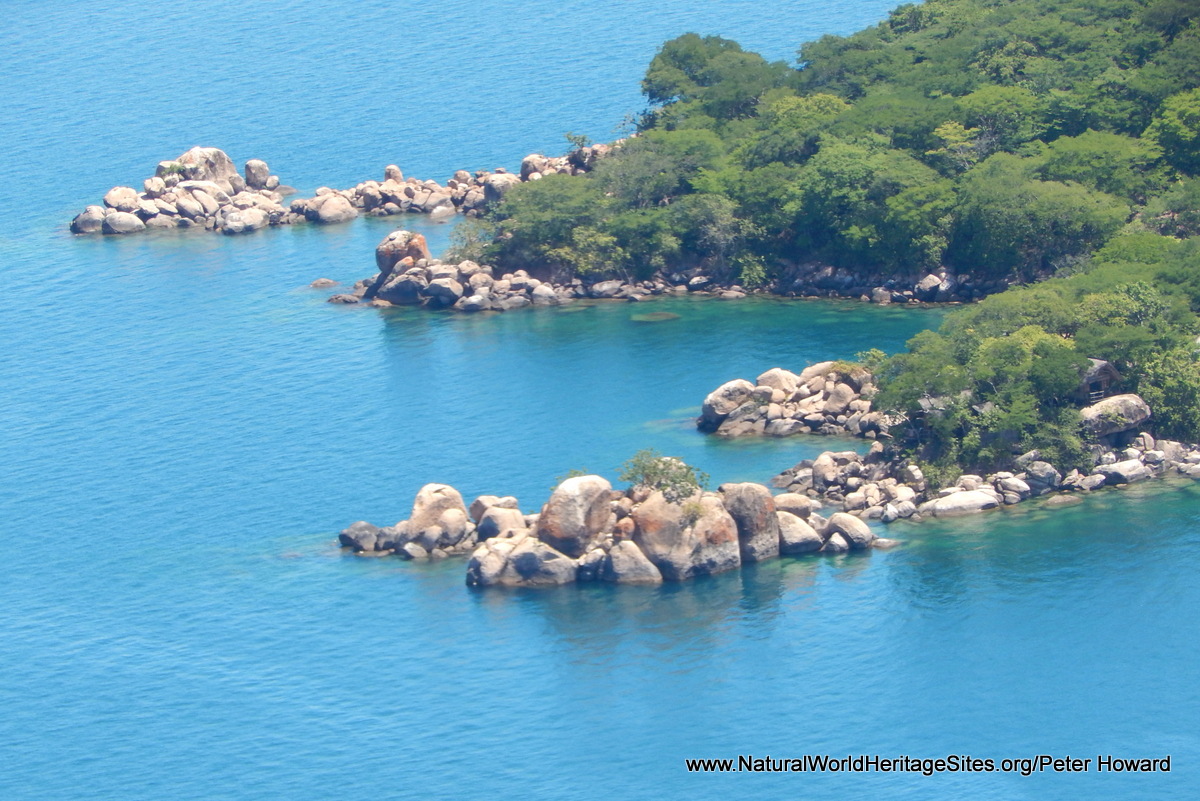 Outstanding natural beauty of lake in Rift Valley: The lake is characterized by its crystal clear waters, and the diversity of habitats amongst its many rocky islands and shores. It is situated in the Great Rift Valley and set against the wooded hillsides of steep escarpments on either side. Much of the shoreline is composed of massive rounded granite boulders, partially submerged and washed by wave action. Between the steeper rocky sections are sun-drenched sandy bays, with inflowing rivers and streams creating the occasional reed-filled lagoon and lake-edge swamps. The juxtaposition of these landscape elements creates scenes of outstanding natural beauty. 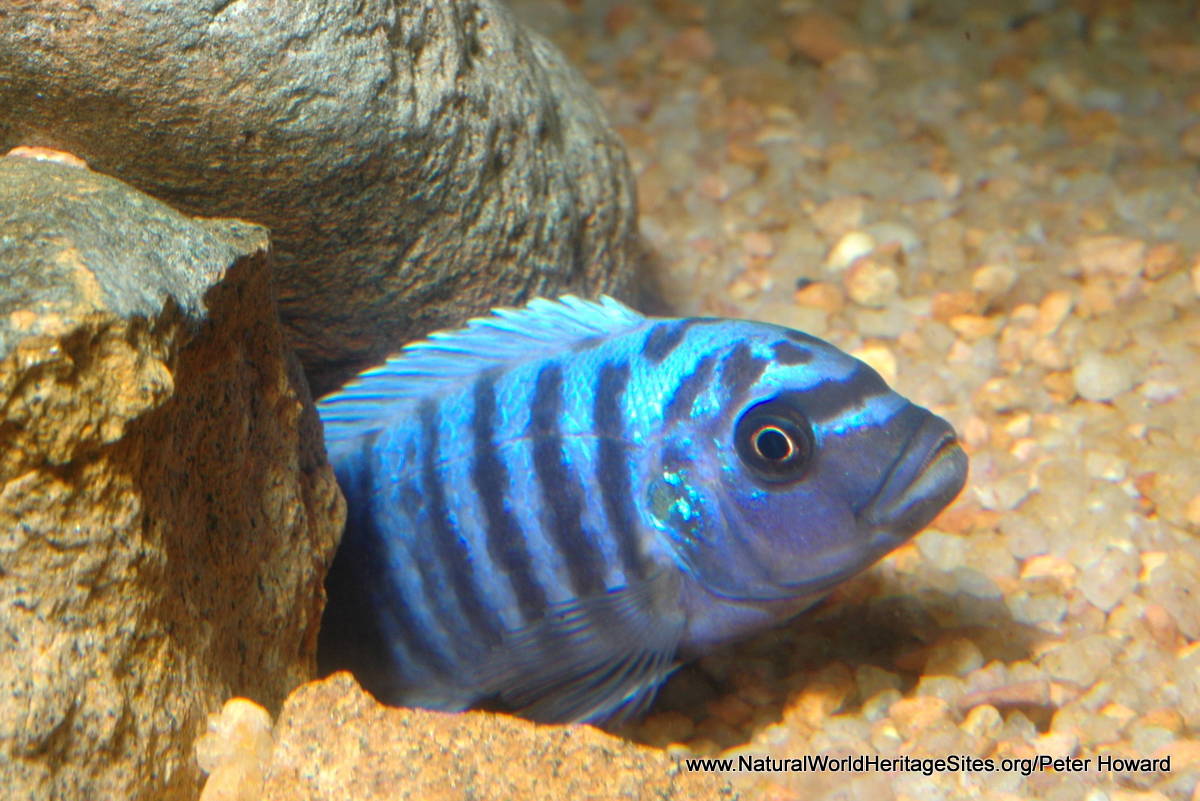 Lake Malawi has more fish species than any other lake in the world, many of them colouful rock-dwelling ‘mbuna’ cichlids such as this Pseudotropheus Zebra

Extraordinary diversity of fish species: The lake is thought to have the largest number of fish species of any lake in the world, with estimates varying between about 1,000 and 3,000 species, of which as many as 800 belong to the family Cichlidae. Lake Malawi is home to 15% of the world’s freshwater fish species.

Extremely high levels of species endemism: Endemism is extremely high, with more than 98% of cichlid fish known only from Lake Malawi.

CONSERVATION STATUS AND PROSPECTS: The policy, legislative and planning framework for Lake Malawi National Park is strong, and its key world heritage values – its scenic qualities and the evolutionary processes that have led to the development if its extraordinarily rich, endemic fish fauna – remain largely intact. These values are however threatened by a number of insidious factors related to the pressures of a rapidly growing human population causing deforestation and soil erosion in the lake’s catchment areas, and ever-more intensive exploitation of fisheries. The national park/ world heritage site is very small (94km2, of which only 7 km2 covers aquatic habitats), accounting for just 0.02% of the lake’s surface area. This makes it especially vulnerable to potentially devastating threats from outside its borders, including the threat of large-scale pollution from oil exploration activities in the north of the lake (already underway), or the impact of predators such as the Nile Perch (which might be introduced at some stage, as it was in Lake Victoria).

MANAGEMENT EFFECTIVENESS: Protection and management activities are severely constrained by lack of resources, and controls on fishing in the aquatic zone are largely ignored by local people. Fortunately, the diverse communities of endemic rock-dwelling Mbuna cichlid fish (which represent the park’s most globally-significant value) appear to be resilient to present levels of fishing, but all the larger species are in serious decline because of over-fishing, even within the park. 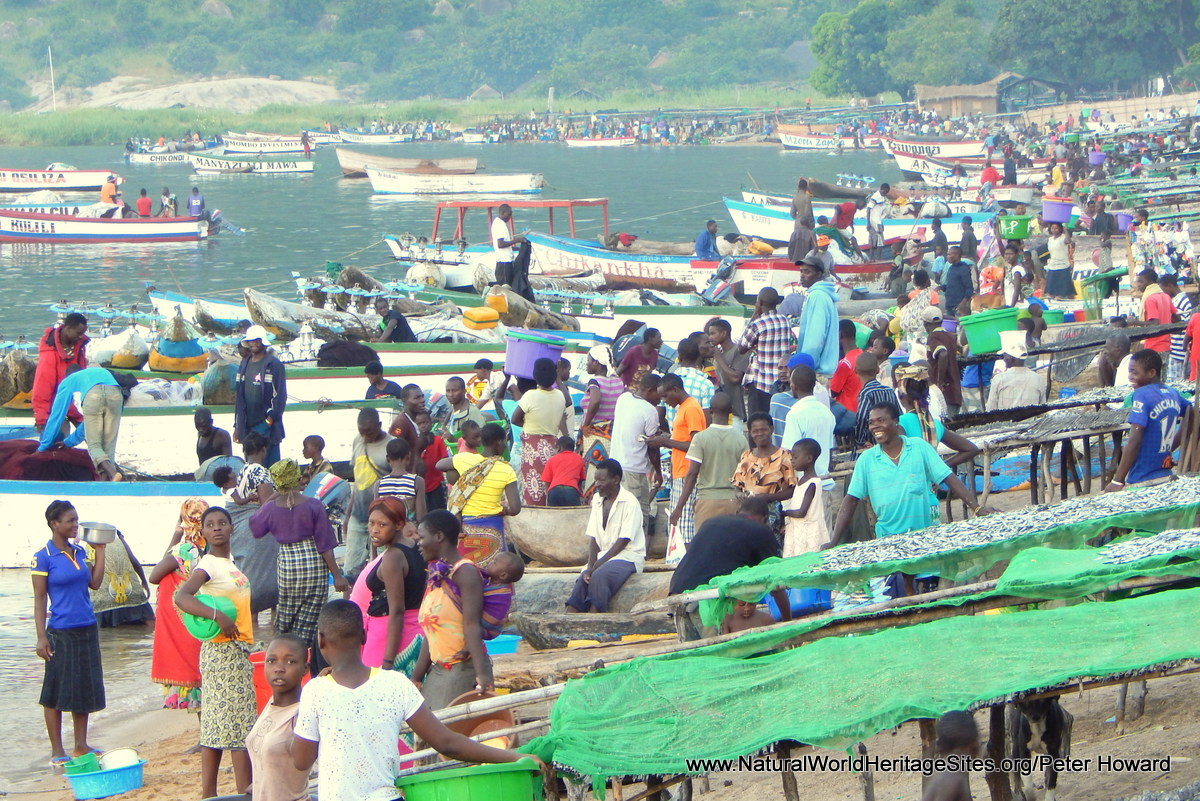 Over-fishing: There are five fishing village enclaves within Lake Malawi National Park (Chembe, Masaka, Mvunguti, Zambo and Chidzale), and over-fishing is reported to be a serious problem, with many species suffering dramatic declines in numbers. However, the 2007 park management plan indicates that the populations and distribution of mbuna cichlids in the National Park have not changed. 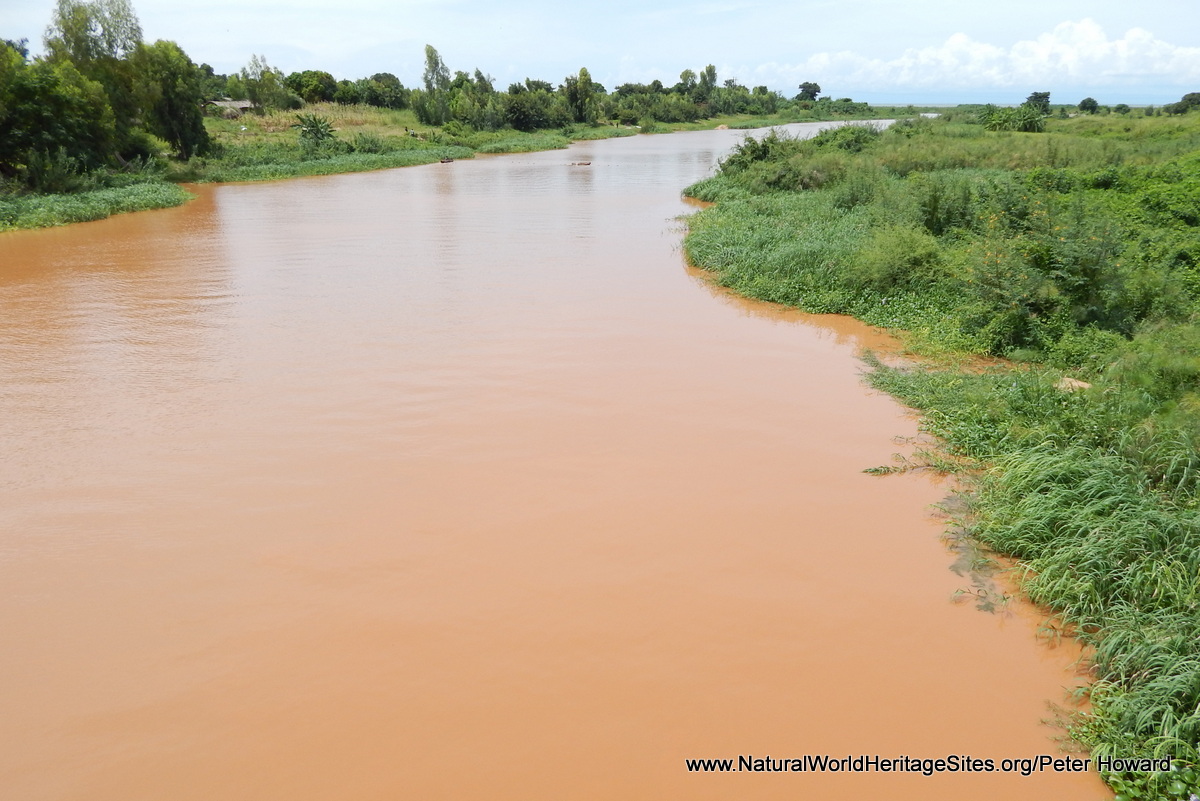 One of the rivers flowing into Lake Malawi, showing the very heavy siltation typical of most of the inflowing rivers

Land degradation, erosion and siltation: Satellite imagery of the lake catchment areas reveals dramatic declines of vegetation cover and increased incidence of bare (eroded) soil between 1984 and 2004 implying increased rates of surface run-off and soil erosion. This is leading to increased rates of siltation, decreased water clarity and alterations in water nutrient balance. The long-term ecological consequences of such changes are not fully understood, but it is likely to have an adverse effect on the rock-dwelling mbuna cichlids many of which graze algae from submerged rocks. Sedimentary deposits on these rocks and decreased penetration of light are likely to interfere with these fish feeding grounds.

Waste management and pollution: Tourist and municipal wastes, including sewage, are polluting both land and water. This is a particular problem around the fishing village enclaves within the world heritage site, but also affects all lakeshore communities. 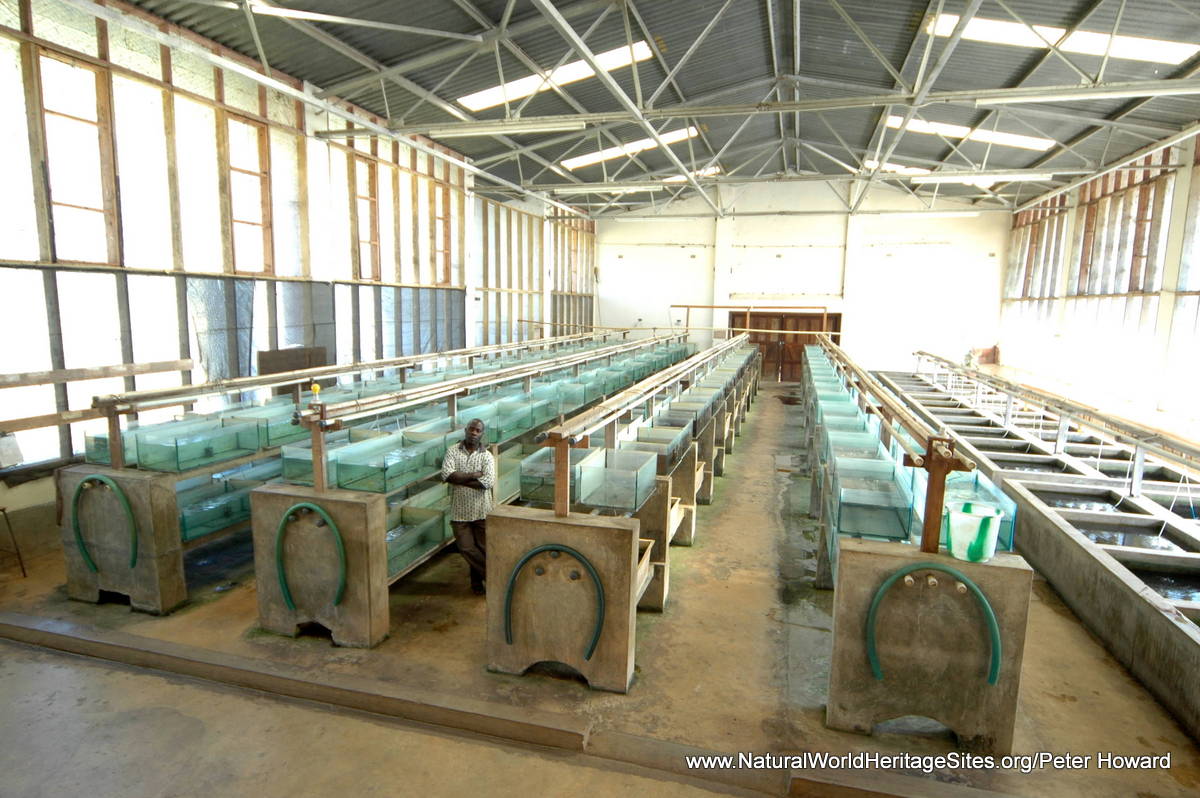 Rows of glass aquariums in the holding facility of one of aquarium fish exporters at Lake Malawi. The aquarium trade can result in accidental release of species and types from different localities, disrupting the natural evolutionary which have created the extraordinary diversity of species and colour morphs throughout the lake

Aquarium trade in fish: Although most of the (considerable) worldwide demand for Lake Malawi’s colourful rock-dwelling ‘mbuna’ cichlids is met through captive breeding programmes in other countries, there is still a significant trade in wild-caught fish from Malawi and Tanzania. The effects of this trade have not been investigated, but it is thought that it may lead to (1) local over-fishing of particular (high-value) species and (2) re-introduction of fish to parts of the lake where they do not naturally occur (most of the mbuna have evolved in particular parts of the lake isolated from other areas of potentially-suitable habitat by habitat barriers such as lagoons or stretches of sand).

Commercial fish farming: A recent development in Lake Malawi has been the introduction of large-scale fish-farming in floating cages. This carries the risk of introduced disease, and may lead to eutrophication of lake waters as a result of the extra nutrient load associated with feeding and excretion in the cages. 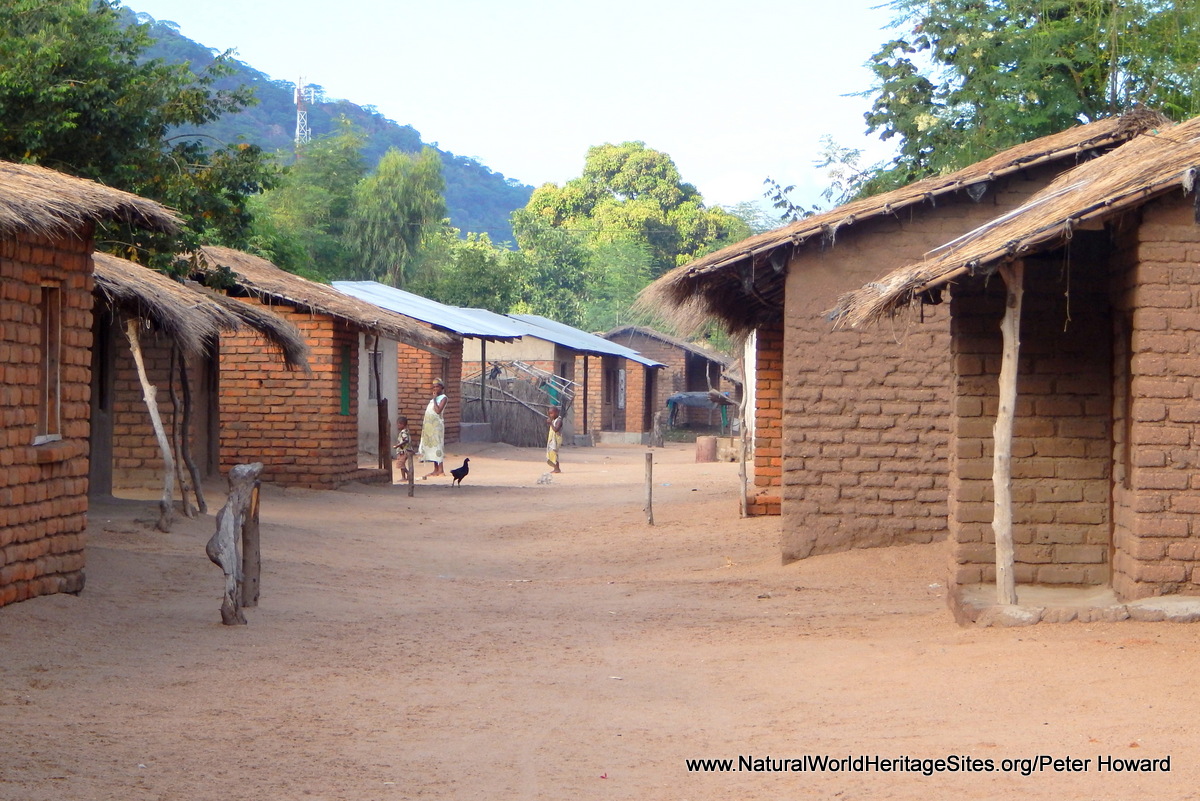 Fishing villages within Lake Malawi National Park has expanded considerably through in the years since the world heriatge site was inscribed, creating increased pressure on national resources within the park

Illegal use of terrestrial resources by local communities: Various kinds of resources are used illegally from the terrestrial areas of the park. Poaching is an ongoing threat, as is the grazing of livestock, tree cutting for building poles, timber and firewood, extraction of sand, gravel and rock for building.

Expansion of enclave settlements: The enclave villages supported about 5,400 people in 1977, but have expanded considerably in subsequent years, creating ever-increasing demands on the area’s natural resources.

Inappropriate tourism development: Although all the existing tourism facilities in and around the park appear to be low-impact establishments, there is a real risk of inappropriate developments that could impact the natural beauty and other attributes of the area. 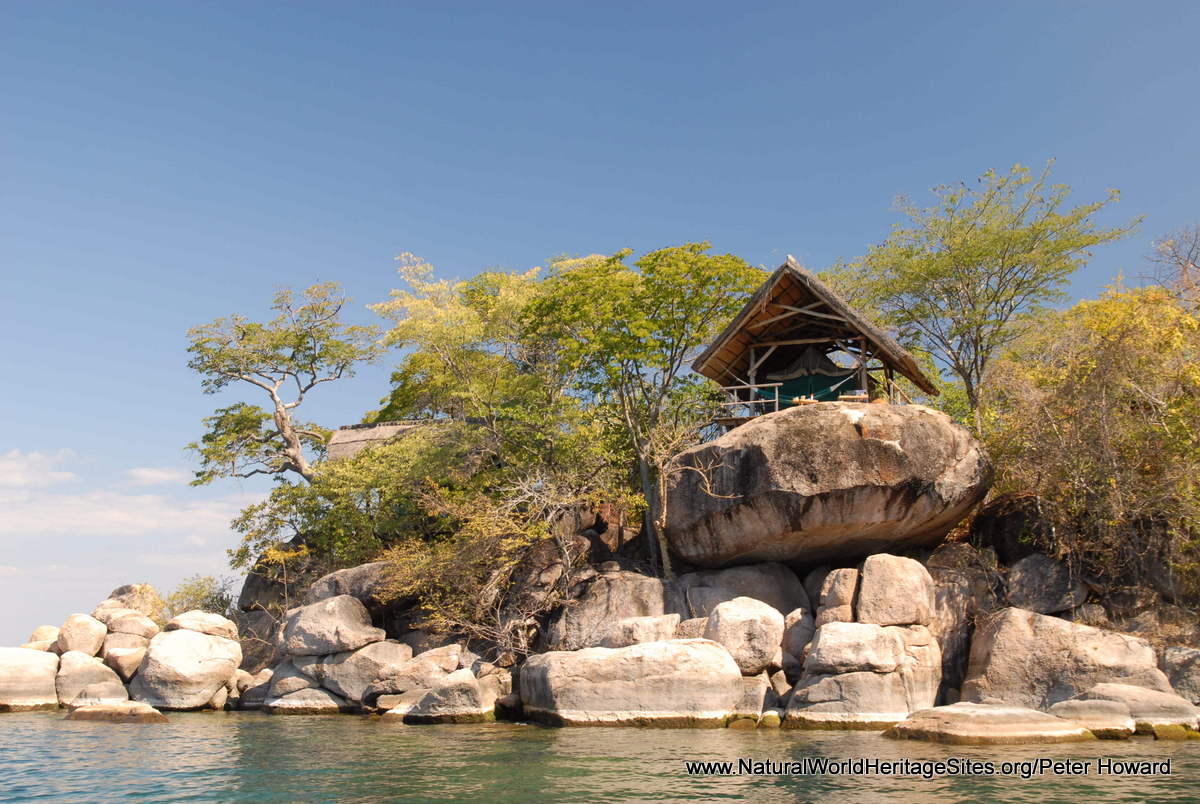 A number of small lodges have been developed around Lake Malawi National Park, providing appropriate eco-friendly facilities. There is a risk of less suitable tourism development and a need for continued vigilance to ensure environmental standards are rigorously applied

Introduction of Nile Perch, Tiger Fish or other alien species: The adaptive radiation of fish species within Lake Malawi is a unique phenomenon that results from its ecological isolation. This could be seriously upset through the introduction of species from elsewhere which have not co-evolved with the Lake Malawi fauna. Particular threats are the possible introduction of Nile Perch, a top-level predator that was introduced to Lake Victoria with dire consequences for many rock-dwelling cichlids there (similar to those in Lake Malawi). Another potential threat arises from a mooted project to open a new channel to the Zambezi which could allow colonization of the Lake by the predatory Tiger Fish with unknown ecological consequences.

Oil and Gas exploration and development: Off-shore oil exploration activities have recently been commenced in the northern part of the Lake. Although this is some distance from the world heritage site it presents the risk of oil and other pollutants spilling into the lake, which would have far-reaching consequences. 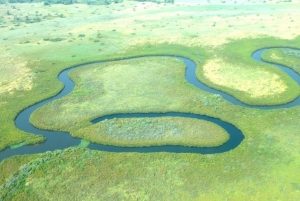 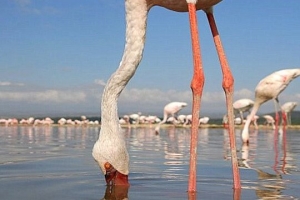