You are here: Home1 / All featured sites2 / Canaima National Park

EXPLORE Canaima National Park with this slideshow, check the location map and get all the facts and information below. 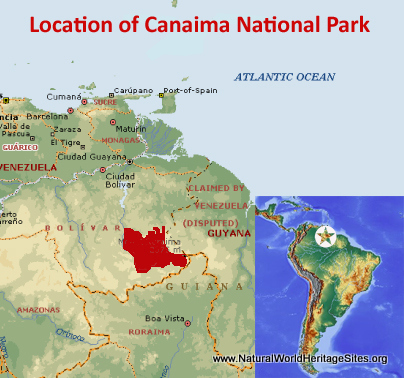 Location and Values: Canaima National Park covers a vast tract of land in south-eastern Venezuela, along the international borders with Guyana and Brazil. The park’s most iconic feature is Angel Falls, the world’s highest waterfall, which drops 1000m in a sheer plunge from a cliff-top into the deep lowland rainforests below. The park lies on the watershed between the Amazon and Orinoco river basins, covering the eastern portion of the Guayana Shield. Its scenery is spectacular, with undulating lowlands punctuated by immense table mountains (known as tepuis), rising sheer-sided for 1000m above the surrounding lands. The ‘lost worlds’ on the summits of these table mountains are covered in cloud for much of the time and (from a biogeographical perspective) serve as an archipelago of habitat ‘islands’ isolated from one another by the intervening lowlands. They support communities of plants and animals, many of which are endemic to the tepuis summits, with some species known only from a single summit. The wildlife is poorly known and much of the biodiversity remains to be discovered but it is clearly exceptionally rich across many taxa. Amongst the mammals are species such as giant anteater, giant armadillo, jaguar, puma, Brazilian tapir, red howler, titi, uacari, capuchin and white-faced saki monkeys. More than 628 bird species are known from the tepuis zones of the park, with many additional species elsewhere. These include many species of hummingbird, toucans, toucanets, macaws, parrots and tinamous as well as top predators such as the harpy eagle.

Conservation Status and Prospects. According to IUCN’s Conservation Outlook Assessment (2017) the conservation status of Canaima National Park is of ‘high concern’. The IUCN report notes that the management authorities do not have enough funds and resources necessary to provide effective management. The main threat is from uncontrolled wild fire, often originating from human activities in and around the park. This vast park is home to groups of indigenous people who have traditionally lived on a sustainable basis from locally available natural resources. However, increases in the populations of indigenous people and immigration of non-indigenous people taking advantage of opportunities for agriculture, cattle keeping, tourism, mining and logging is resulting in unsustainable pressure on natural resources, at least within the more accessible parts of the park.
The natural habitats of Canaima National Park are becoming increasingly fragmented as human settlements expand and forest is cleared to make way for pastures. A major electricity power transmission line passes through the park, providing easy access to the interior, and exacerbating the problems of habitat fragmentation, with the introduction of illegal logging, hunting and mining in some areas that were previously inaccessible. Illegal gold and diamond mining is spreading from the eastern and western margins of the park, bringing pressures on natural resources, illegal hunting and lethal pollution of waterways with mercury used in gold mining operations.

The slideshow ‘tells the story’ of Canaima National Park with a portfolio of photos that illustrate the landscape features of this outstanding place, together with some of the typical plants and animals.  It starts with some general views of the tepuis and the forests that fill the undulating lowlands below, before featuring the spectacular 1000m high Angel Falls. Some typical plants and animals are shown, including an orchid and an endemic insectivous plant (Drosera roraima), swallowtail and Morpho butterflies and birds such as the keel-billed toucan, sparkling violetear and turquoise tanager.

The best way to appreciate the landscape features is from the air and some aerial views are provided, showing the lowland forests, waterfalls, and rivers as well as the rocky summits of the tablelands. Three of the typical monkeys – red howler, titi and white-faced saki – are shown before a series of photos to illustrate the diversity of spectacular waterfalls that are such a prominent feature of Canaima National Park.  At the end of the slideshow one of the riverside communities is illustrated. An aerial view of a typical forest clearing illustrates how people are expanding into the park’s lowland rainforests and contributing to the increasing fragmentation of habitats in some areas of the park. 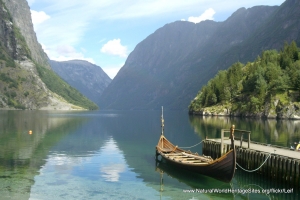 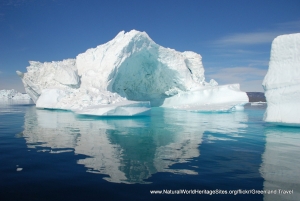