EXPLORE Rock Islands Southern Lagoon with this slideshow, check the location map and get all the facts and information below. 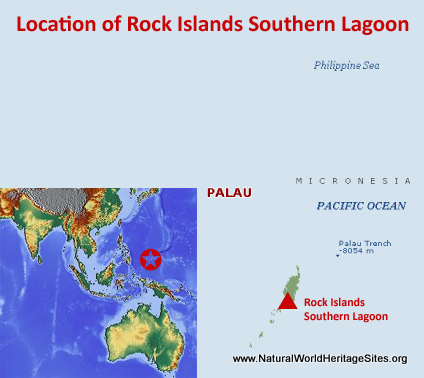 Location and Values: The Rock Islands Southern Lagoon protects a picturesque archipelago of 445 small dome-shaped islands sheltered behind a barrier reef in the western Pacific island state of Palau. The islands of the lagoon are derived from limestone, uplifted by volcanic action, with wave-undercut shorelines and characteristic karst features such as coves, caves, fissures, tunnels and sinkholes. They are covered in lush tropical rainforest and enclose 52 small marine lakes which are replenished through the porous substrate, but remain ecologically isolated from one another sufficiently to allow evolutionary processes to operate within each lake, giving rise to endemic species. These are highly unusual features and the marine lakes of Rock Islands Southern Lagoon represent a quarter of the world’s total.
Apart from the islands with their marine lakes (which account for about 6% of the site’s total area) there is an enormous diversity of marine habitats in the surrounding lagoon including seagrass and algal beds, sand flats, steep submarine slopes and walls, and a variety of reef types including an outer barrier reef cut by tidal channels. In addition to the natural values of the Rock Islands Southern Lagoon the world heritage listing recognizes the area’s outstanding cultural values as the islands were settled by people for almost 3,000 years until they were abandoned in the 17th and 18th centuries, leaving behind the remains of stonework villages, burial sites and rock art.

Conservation Status and Prospects. According to IUCN’s Conservation Outlook Assessment (2020) the conservation status of the Rock Islands Southern Lagoon is ‘good, with some concerns’. The IUCN report notes that up-to-date information on the site is limited, but there remains some concern over visitor impacts and climate change. Tourism is Palau’s largest industry, sustaining its economy. Most visitors stay in the urban centre of Koror and their impacts include increased demand for locally caught seafood, pressures on sewage and waste disposal systems, and direct impacts through overcrowding, litter, and damage to corals etc at the most popular dive and snorkeling sites. Only one of the marine lakes (Jellyfish Lake) is open to visitors as the marine lakes are particularly fragile environments, and the accidental introduction of species from elsewhere needs to be avoided. Jellyfish Lake has already been affected by the introduction of an anemone, significantly altering its ecology.
Climate change is considered to be the main potential threat to Rock Islands Southern Lagoon as it is expected to increase ocean temperatures, resulting in more severe and frequent coral bleaching events, sea level rise, increased storm damage and seawater acidification with a resulting reduction in the capacity of marine life to develop coral and shell structures through calcification. In addition to these main ongoing threats to the site, the IUCN evaluation of 2011 noted that fish populations at the time were well below those recorded in the 1960s-70s as a result of overfishing. While subsistence and sport fishing are allowed, there is need to establish more no-take zones to prevent overfishing and allow stocks to recover. Additional, relatively minor, threats that require careful monitoring and management include (1) the impacts of some aquaculture activities within the site and close to its boundaries, (2) some illegal poaching of dugong and sea turtles, and (3) impacts of two development projects that have been allowed within the site in the form of a dolphin research and amusement facility and a sand mining operation.

The slideshow ‘tells the story’ of the Rock Islands Southern Lagoon with a portfolio of photos that illustrate the landscape features of this outstanding place, together with some of the typical marine and terrestrial life. It starts with a long series of aerial views which portray the extraordinary beauty of the site and the complexity of its many characteristic habitats. The next part of the slideshow takes a look at the underwater world of clown anemone fish, turtles, manta rays, an endemic species of (‘living fossil’) nautilus, starfish and giant clams. It finishes with views of the terrestrial environments as viewed from a boat, and then onshore where dense forests, crabs, a toad, fern and insectivorous pitcher plant are shown.

The following Flickr photographers are acknowledged with thanks for their contributions to this slideshow: Pablo Marx, Jeff~, Aqua Immersion and Stephen Masters. 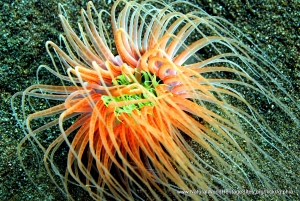 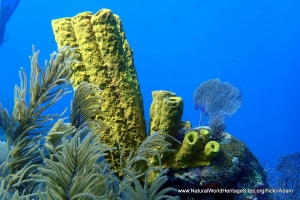