You are here: Home1 / All featured sites2 / Vredefort Dome

EXPLORE SOUTH AFRICA’S VREDEFORT DOME with this slideshow, check the location map and get all the facts and information below. 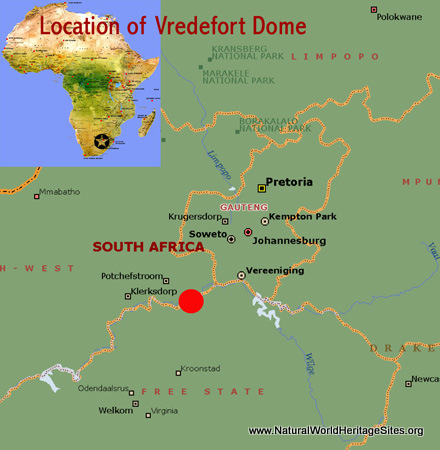 A comprehensive review of the world heritage values of the site is provided below, together with details of the area’s conservation status and the threats it faces. The process and consequences of the short duration of the actual meteorite impact are also illustrated with a series of stage-by-stage illustrations.

REVIEW OF WORLD HERITAGE VALUES: According to IUCN’s Conservation Outlook Assessment (2014), the specific attributes which qualify Vredefort Dome for world heritage status can be summarised as follows:

Evidence of pre-impact environments. Evidence of the surface environment of the site before the meteorite impact is provided by fossil stromatolites (early forms of life). These have been protected in one of the ‘satellite’ sites outside the main area of the world heritage site.

Evidence of rebound. The central part of the world heritage site exposes rocks normally found at a depth of 25 kilometres below the surface. These exposures are the result of a ‘rebound’ effect in the Earth’s crust immediately after the impact.

Evidence of energy release. The area witnessed the world’s greatest known energy release event. The extreme physical conditions of the impact produced unique shock metamorphic effects that can be seen in the present-day geology of the area. Evidence of the extreme heat and pressure created by the impact include shatter cones and impact-related breccias (pseudotachylite), stress release features in very hard rock (chocolate tablet boudinage brecciation); the creation of polymorphs of quartz (Coesite and Stishovite) and possible impact melting. While most of the geological features are represented in the main component of the world heritage site there are two separate ‘satellite sites’ that help protect fine examples of chocolate tablet boudinage brecciation and pseudotachylite.

CONSERVATION STATUS AND PROSPECTS: The geological values of the site remain largely intact although there have been some geologically-significant areas (mostly outside the world heritage site) that have been affected in the past by stone quarrying and other development activities. It is unusual for a natural world heritage site to be under private land ownership and special measures are required to ensure protection of its world heritage values and long-term sustainable management. There are some challenges over tourism management (especially related to visitor access and tourism infrastructure development) and pollution of the VaalRiver. In addition, there is a need to ensure that appropriate national legislation is promulgated and a management authority established, while improving co-ordination in developing the site between the two provincial authorities concerned.

MANAGEMENT EFFECTIVENESS: Most of the site is under private ownership and managed as farmland. The landscape features arising from the meteorite impact are visible within the context of a functioning farming community rather than a totally protected landscape. The underlying geological features are naturally resilient and persist in their rural setting despite the super-imposed settlements, farming and pastoral activities. A Memorandum of Agreement over protection and management of the site was signed with private landowners in 2012, but this has not yet (2015) resulted in necessary national legislation, the establishment of a site Management Authority, or the development of a management plan. Although many landowners allow visitors onto their properties, there is no public access to most of the area’s interesting geological features, so visitors have to seek individual permission to visit points of interest.

REVIEW OF CONSERVATION ISSUES AND THREATS: The following issues represent specific threats to the world heritage values of the Vredefort Dome site.

Visual impact of infrastructure developments. Rural roads, villages, buildings, fence-lines and other rural infrastructure are prominent components of the landscape, distracting from the landforms and features that provide evidence of the meteorite impact. In addition as tourism increases, there is a risk that inappropriate tourism infrastructure is developed at important sites of geological interest.

Inappropriate land uses. There are currently no restrictions on the type of land-use that may be adopted by landowners, so there is some risk to the underlying geological features if a landowner undertakes something damaging.

Pollution. The VaalRiver has been contaminated by upstream mining activities and the release of partially treated waste water from within and outside the site. This has the potential to cause dieback of riparian vegetation and may impact the visual attributes of the rural landscape.

Mining and Quarrying. The private property status of the lands may permit some quarrying activity which could affect the integrity and values of the site.

ILLUSTRATION OF THE DEVELOPMENT OF THE VREDEFORT DOME METEORITE IMPACT STRUCTURE (ASTROBLEME). The impactor that formed the meteorite impact structure was either a large body such as an asteroid with a diameter of about 12 km travelling at a velocity of 20 km/sec, or a smaller one, such as the head of a comet, approaching at a much higher speed. The impact event created the greatest single energy release known for the surface of the earth. The meteorite impact structure (astrobleme) is thought to have been created in about 4 hours. Major stages in the evolution of the structure are illustrated below:

Stage 1: The area immediately prior to impact. The downward dip shown in the far north-western sector (far left of diagram) schematically depicts folding associated with the emplacement of the Bushveld Igneous complex.

Stage 2: At impact. A shockwave is generated at the moment of impact, followed by the excavation of a transient crater. Delamination of the Earth’s crust and transport away from the impact zone occurs over the surface (coinciding with the Black Reef Formation that forms the base of the Transvaal Supergroup). The leading edges of large plate-like segments formed during this stage presently outline the most distal Vredefort-related faults found on the surface.

Stage 3: First stages of penetration and transient crater excavation. More material is accelerated away from the impact point. Folding is starting to develop and a dent is starting to form. As the dent deepens, deeper penetration of the impactor results in further outward acceleration of material. Old fault surfaces are now re-activated (such as those of the Ventersdorp extensional age found beyond the Blaaubank anticline). These faults now assume the role of fortuitously-placed ramps.

Stage 4: Continued outward-directed stress. Rock around the impact site is extremely highly compressed as the ‘Foch stress system’ moves material over the ramp surface created by the dent. On the present section line the Blaaubank anticline provides an obstructional ramp to the Foch Thrust’s normally circular outline. A set of intricate nappes is thereby formed on the crater-ward flank of the anticline. Note that, in time, ring thrusts will develop successively closer to the impact point.

Stage 6: Rebound. Near the end of the process of centripetal transportation of the previous stage, the inner zone of the system, situated within the newly-created final crater rebounds. A much larger central cone, underlain by a mantle dome, is formed. The dent is now modified to assume the shape of an annular syncline, termed the Potchefstroom Synclinorium. Inward moving may have overshot the central cone but now starts falling back over the slopes of the rebound-associated uplift. Fallback movement is in two stages producing two Foch Fault components. The older component moved further outward and away from the cone, whilst the inner component did not move as far. The system contains a multitude of intricate nappes. Beds of the younger inner component are predominantly overturned, whilst overturning is not as common in the outer component.

Stage 7: Equilibrium. The impact-directed stress fields responsible for the formation of the astrobleme ( meteorite impact structure) have now attained equilibrium and no more tectonic movement takes place. Vertical movement stemming from isostatic inequilibrium is slowly neutralised. The stage is set for 1,500 million years of erosion modification, followed by the deposition of a cover of sediments belonging to the Karoo Supergroup. In this process a substantial portion of the south-eastern section is removed by erosion.

Stage 8: The present. The astrobleme now protrudes from below more recent sediments of the Karoo, which still cover its south-eastern half. The extent and shape of the covered portion has been confirmed by extensive gold exploration drilling and geophysics. The main features of the central part of the Vredefort Dome that can be seen today are formed by its granite basement rock core and the exposed part of the overturned collar. Despite the broadly circular and subvertical orientation of the strata around the collar of the dome, the structure is complicated on a smaller scale by both folding and faulting. Rocks and geological structures exhibit a mixture of compressional and extensional stress effects. The annular syncline, the basement rock dome and erosion resistant strata of the overturned collar help define the ring structure of the meteorite impact structure.

The slideshow provides a comprehensive overview of South Africa’s Vredefort Dome world heritage site, showing its rural farming landscapes and the up-ended rock strata around the ancient meteorite impact crater. It features a number of geological specimens that provide evidence of the meteorite impact, while also illustrating some conservation management issues and local community livelihoods in the area. 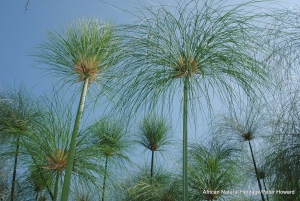 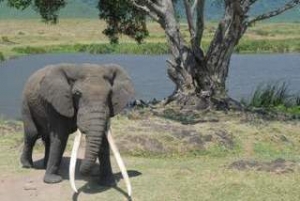