EXPLORE Vatnajökull National Park – Dynamic Nature of Fire and Ice with this slideshow, check the location map and get all the facts and information below. 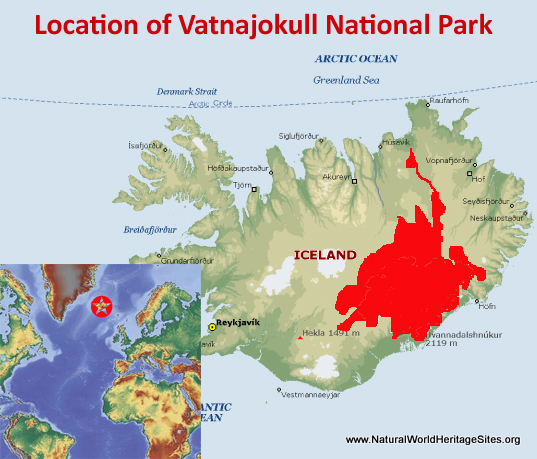 Location and Values: Vatnajökull National Park covers about 14% of Iceland, and is located just a few degrees south of the Arctic Circle. Most of the land is permanently covered in ice, the Vatnajökull ice cap, which lies on top of 10 volcanoes, two of which are frequently active. This juxtaposition of glacial ice and active volcanism is reflected in the name of the site, where fire and ice interact in extraordinary ways, creating a highly dynamic geophysical environment and ever-changing landscapes. One particularly noteworthy phenomenon occurs when a volcanic eruption takes place under the ice, resulting in a sudden flood as the margin of a glacier is breached. The surge of water into the surrounding lowlands creates unique outwash (sandur) plains, river systems and rapidly evolving canyons.
From a geological perspective, the site lies at the intersection of two rift zones where Earth’s major tectonic plates are moving apart (by about 19mm each year), along the Mid-Atlantic Ridge. The island of Iceland represents the only part of the ridge that emerges above sea level. The Earth system interactions that are uniquely demonstrated at Vatnajökull have been subject to intense international scientific interest resulting in some 300 recent papers on various aspects of plate tectonics, volcanism, glacio-volcanism, glaciology, geomorphology and ecology. One research area of particular global significance is climate change and its impact on the accelerating processes of glacial retreat, which can be easily observed and monitored at the front of Vatnajökull’s many outlet glaciers.

Conservation Status and Prospects. IUCN’s Technical Evaluation of the (2019) world heritage nomination noted that the conservation status of the site is generally good with more than 95% of its area being very remote, with a correspondingly high level of natural protection. Vatnajökull’s world heritage listing is based on glacial and geomorphological features, which are inherently resilient attributes. However IUCN notes that these values are likely to be impacted by climate change in the longer term. This is already evident as the area’s many outlet glaciers are retreating rapidly, and it is thought that a warming climate may ultimately lead to the complete loss of the Vatnajökull ice cap. As this process continues observations at Vatnajökull may at least help raise awareness towards necessary global action on climate change, even if this is achieved at the cost of irreversible loss of important attributes here.
In the more immediate future, a number of other issues may affect the conservation status of Vatnajökull National Park, including tourism, off-road driving, quarrying, hydropower development and traditional use of renewable natural resources. Tourism is growing rapidly and visitor management will continue to be one of the key challenges for park authorities, especially at the small number of easily accessible tourism hotspots. Off-road driving is resulting in local degradation of scenic values, while two areas of gravel extraction for road maintenance are also affecting the aesthetic values of the park locally. Traditional use of natural resources within the park by local residents, including the grazing of sheep, hunting, fishing and collection of various other plant and animal products is considered sustainable and unlikely to affect the site’s world heritage values. In the longer term, hydropower development may become a more significant threat, but there are no immediate plans for such developments.

The slideshow ‘tells the story’ of Vatnajökull National Park with a portfolio of photos by Bastian Bertzky from an IUCN evaluation mission in September 2018. They illustrate a variety of the landscape features of this outstanding place, with its numerous ice-bound volcanic peaks, glaciers, glacial lakes with icebergs of extraordinary colour and shape, and geomorphological features such as canyons and outwash plains (sandurs) arising from the occasional jökulhlaups (melt-water surge events following sub-glacial eruptions). Some of the tourism facilities, including signage, outdoor interpretation panels and a small visitor centre are illustrated, as well as one of the specialist amphibious vehicles used to take visitors ‘off the beaten track’. 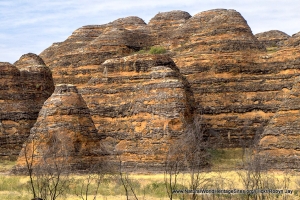