You are here: Home1 / All featured sites2 / The Sundarbans

EXPLORE The Sundarbans with this slideshow, check the location map and get all the facts and information below. 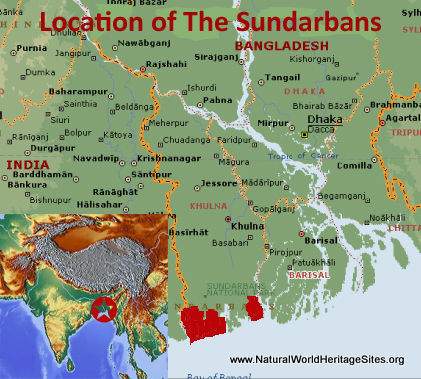 Location and Values: The Sundarbans is part of the largest mangrove forest in the world, located across the outer delta of the Ganges, Brahmaputra and Meghna rivers where they flow into the Bay of Bengal. The delta, extending over 10,000 km2, straddles the border between India and Bangladesh, where two adjacent world heritage sites protect a quarter of the delta’s total area. The Sundarbans forest occupies a multitude of small islands and mudflats intersected by an intricate network of tidal waterways, with about 15 major rivers running North-South through the delta from their source in the three major inflowing rivers at the head of the delta. The delta is in a constant state of ecological change in response to monsoon flooding, siltation, erosion, tidal influence, plant colonization and the impact of severe weather events such as cyclones.

The Sundarbans is the only remaining habitat in the lower Bengal Basin with a wide variety of fauna, including rare and endangered species such as the Bengal tiger and estuarine crocodile as well as 315 species of birds, 53 reptiles and an estimated 400 species of fish. Protection of the site is all the more important given that 40% of the natural habitat that existed in the delta 200 years ago has been converted to agriculture, with the loss of most of the area’s large mammals. Species that have become locally extinct as a result of agricultural reclamation and increases in soil salinity include Javan and Indian rhinoceros, Indian water buffalo, muntjac, swamp and hog deer, gaur, gharial, mugger crocodile and narrow-headed softshell turtle.

Conservation Status and Prospects. According to IUCN’s Conservation Outlook Assessment (2017) the conservation status of The Sundarbans is of ‘significant concern’, as the site’s world heritage values are showing signs of deterioration. The IUCN report notes that, while some of the threats originate beyond the site boundaries, they are many and severe. These include (1) unsustainable levels of resource use and extraction affecting vegetation communities and loss of endangered species within the mangrove forests, (2) spread of plant diseases affecting mangrove species, (3) harmful fishing practices, (4) extraction of freshwater in upstream areas leading to altered hydrology and increased salinity, (5) pollution from shipping and upstream industrial development (including a proposed power plant at Rampal), (6) impacts of shrimp aquaculture, (7) poaching of high value species (including Bengal tiger) for the illegal wildlife trade, (8) insufficient funding and management capacity and (9) climate change resulting in rapid sea level rise, inundation and erosion, as well as anticipated increases in the frequency and severity of storms, tidal surges and other catastrophic weather events.

The slideshow ‘tells the story’ of The Sundarbans with a portfolio of photos that illustrate the main landscape features, wildlife and human activities in the delta. The slideshow begins with some views of the smaller tidal channels and adjacent forests, where wildlife such as rhesus macaque and chital (Indian spotted deer) are most commonly seen. Close attention may be required to spot snakes and other reptiles amongst the mangroves, and identify any of the 315 species of birds, including parakeets and kingfishers. A certain amount of patience and perseverance may be rewarded with the sighting of a Bengal tiger swimming across a channel in front of a boat at any time, while estuarine crocodiles may be spotted on the tidal mudflats and a Ganges River dolphin may surface in the silty waters of the larger waterways.

The tidal mudflats are home to mudskippers and fiddler crabs, while ospreys keep watch for an easy meal from branches overhead. Ducks and wading birds may be spotted together with three species of monitor lizards foraging along the tidal mud flats with adjutant storks and wild boar.

The next part of the slideshow illustrates some of long-term damage that is inflicted on the forest by periodic cyclones and storms, such as Cyclone Sidr in 2007, which affected at least a quarter of the site and may take 40 years to recover. A previous major cyclone hit the area in 1991, and climate change may increase the frequency and severity of such events in future, making conservation of the remaining forest all the more important as a protective buffer for areas further inland where people are living. The final part of the slideshow illustrates the wide range of economic activities undertaken by local people using the resources of the mangrove forests and waters of the delta. This includes harvesting honey from wild bees, cutting grass for thatching, and a range of different fishing techniques. One of the more interesting fishing techniques that is illustrated in the slideshow uses domesticated otters to guide fish into nets lowered from a boat. 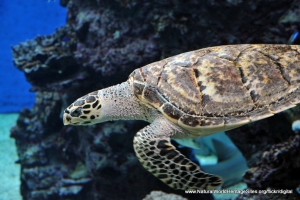 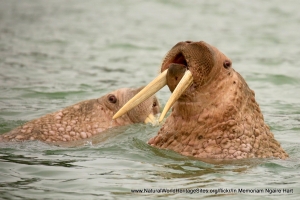