Cliff of Bandiagara (Land of the Dogons)

You are here: Home1 / All featured sites2 / Cliff of Bandiagara (Land of the Dogons)

EXPLORE MALI’S CLIFF OF BANDIAGARA (LAND OF THE DOGONS) with this slideshow, check the location map and get all the facts and information below. 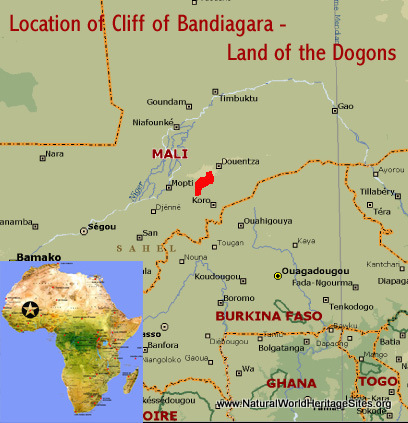 Values: The Bandiagara escarpment, Land of the Dogons, is one of the most impressive geological, archaeological and ethnological landscapes in West Africa. It is a ‘mixed’ site, listed on both natural and cultural criteria. It is characterised by a 150km-long sandstone cliff, with a rocky plateau on top, and a sandy plain below. The plateau varies in height from 100 m to over 500 m and is broken by ravines, gorges and rocky passages connecting the plain with the plateau. The escarpment itself is rich in plants and vegetation types which have been destroyed by man in more accessible places. These are mostly relict humid species sheltering in the ravines in an otherwise arid Sahelian climate, including several endemic species. The area was occupied centuries ago by the Dogon people, who have retained their traditional animist beliefs, culture, and unique architecture. The cliff protects beautiful houses, granaries, altars, sanctuaries and communal meeting-places which for centuries have been the heart of traditional Dogon culture.

REVIEW OF WORLD HERITAGE VALUES: The ‘Cliffs of Bandiagara (Land of the Dogons)’ site qualifies for world heritage status primarily for its cultural values as a region where people have lived for thousands of years in harmony with their natural environment. According to IUCN’s Conservation Outlook Assessment (2014), the specific attributes which qualify the site under natural criteria can be summarised as follows:

Outstanding diversity of geomorphological forms. The diversity of geomorphological features associated with the dramatic sandstone escarpment is exceptional in a West African context. Three distinct areas can be distinguished – the high plateau or “toro”, the cliff or “koko”, and the lowland plain or “seno”. The sandstone cliffs vary in height from about 100m to 300m, and the associated geological features (caves, rock towers, crevices, pavements, scree and boulder fields and dunes) are the product of continuous erosion by wind and water.

Area of exceptional natural beauty. The sandstone cliffs of Bandiagara are a natural area of unique beauty with extraordinary far-reaching views from top of the cliffs. The beauty of the place is enhanced by the spectacular geological features and the diversity and nature of the dryland vegetation, punctuated with the occasional green ‘oasis’ in wetter areas. The most unusual habitats are found where plants have grown in crevices of the sandstone cliff and perched on piles of debris detached from the cliff face. The cliffs provide the only known location for an endemic plant Acridocarpus monodii.

This is one of Africa’s few ‘mixed’ world heritage sites, listed under both cultural and natural criteria. It was inscribed before the recognition of ‘cultural landscapes’, and this would probably have been a more suitable designation, given the close relationship between people and nature. In any case, the area’s most exceptional features clearly fall under the Convention’s cultural criteria, and the justification for recognising it under natural criteria is relatively weak.

CONSERVATION STATUS AND PROSPECTS: Although the geomorphological features of the site remain intact, the biological and cultural elements have been significantly degraded. From a cultural point of view, the Dogon people are increasingly influenced by external religious, economic and cultural factors, and traditional elements of their culture are being lost. At the same time, a growing population is exerting unprecedented pressure on biological resources, with over-cutting and over-harvesting of native trees, shrubs and herbs resulting in the progressive degradation of natural elements within the landscape and accelerating rates of desertification. It is likely that most of the larger mammals have already been extirpated from the area through hunting and habitat loss.

MANAGEMENT EFFECTIVENESS: There is serious concern over the effectiveness of management, particularly in relation to managing tourist pressure, regulating the construction of non-traditional buildings and preventing the progressive loss of traditional cultural values. Present management efforts are insufficient to reverse the processes leading to desertification by stopping the degradation of natural vegetation, reducing grazing pressure from domestic livestock, controlling the incidence of wild-fires, and eliminating hunting. Although a management plan is in place, staff lack adequate training and resources to implement it effectively.

REVIEW OF CONSERVATION ISSUES AND THREATS: The following issues represent specific threats to the ecology, conservation and values of the natural elements of the Cliffs of Bandiagara (Land of the Dogons) world heritage site.

Changes in traditional ways of life and knowledge systems. The area has become progressively better connected to the outside world with improved roads, communications and market access, the advent of modern educational systems and the advance of ‘new’ religions in the form of Islam and Christianity. This process of modernisation is rapidly undermining the foundations of traditional culture, and the belief system that ensured the protection of key attributes of the natural world and totem species.

Impact of tourism. Tourism is impacting the site in many ways, both positive and negative. On the positive side, it provides an economic incentive to maintain some traditional skills and practices which might otherwise disappear, such as wood carving and the performance of traditional masked dances. On the other hand, creating jobs and economic opportunities in tourism encourages local people to adopt modern lifestyles at the cost of traditional belief systems. It is these ancient belief systems that have sustained the relationship with nature, and ensured the conservation of important cultural totems and resources. Tourism also increases pressure on local resources, as visitors need to be provided with everything from firewood and water to ‘authentic’ souvenirs (such as masks and replica carved granary doors) made from scarce locally-sourced materials.

Increased incidence of drought. There has been a tendency towards reduced rainfall in recent years, with 40-50% less than normal. This exacerbates the impact of tree-cutting and grazing of domestic animals on the vegetation and accelerates the process of desertification.

Fire. The natural vegetation is being further degraded and threatened by the high incidence of fire, often used deliberately to clear vegetation for farming, especially around the villages.

Civil Unrest. Recent rebel incursions and terrorist attacks in Mali, some of them quite close to the site have resulted in a marked decline in visitor numbers and tourism income. This has encouraged people to look for alternative livelihoods, sometimes detrimental to nature and the environment.

Looting and trafficking of cultural property. There have been recent cases involving the theft and sale of local artefacts, undermining local cultural values.

The slideshow provides a comprehensive overview of Mali’s Cliff of Bandiagara (Land of the Dogons) world heritage site, showing the area’s spectacular escarpment landscapes and wildlife habitats as well as the unique traditional cultural context and local community characteristics. 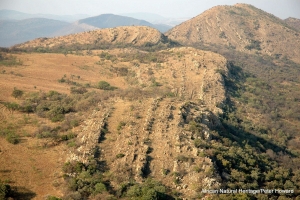